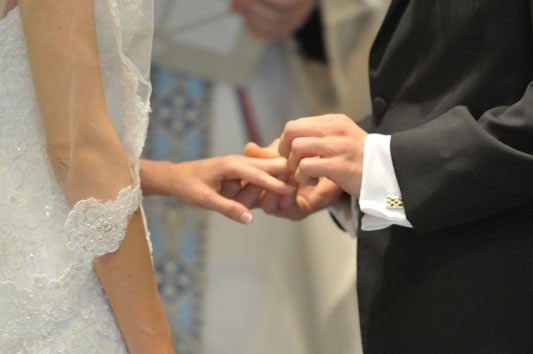 I am often approached by widows and widowers after the death of a spouse with a question similar to this one, which was submitted to me at my “Question and Answer” column in Our Sunday Visitor.

I recently lost my husband of 46 years and long to be reunited with him one day. But some people have told me that our marriage ended with his death and that Jesus says we will not be married or considered spouses in heaven. This is difficult for me to understand. Will we even know each other in heaven or have anything special there between us?

One can certainly hear the pain in her question. It is perhaps a needless pain, born out of an unnecessarily strict reading of Jesus’ words in the Gospel of Mark. Jesus was responding to a hypothetical question posed by the Sadducees about a woman who had been married to seven different brothers and bore no children to any of them. They raise this not so much as a marriage question but as a way to make the teaching of the resurrection appear ludicrous. Jesus sets aside their argument in the following way:

Some Sadducees, who say there is no resurrection, came to him and put this question to him, saying, “Teacher, Moses wrote for us, ‘If someone’s brother dies, leaving a wife but no child, his brother must take the wife and raise up descendants for his brother.’ Now there were seven brothers. The first married a woman and died, leaving no descendants. So the second married her and died, leaving no descendants, and the third likewise. And the seven left no descendants. Last of all the woman also died. At the resurrection, whose wife will she be? For all seven had been married to her.”

Jesus said to them, “Are you not mistaken because you do not know the scriptures or the power of God? When the dead rise, they will neither marry nor be given in marriage. Instead, they will be like the angels in heaven. As for the dead being raised, have you not read about the burning bush in the Book of Moses, how God told him, ‘I am the God of Abraham, the God of Isaac, and the God of Jacob’? He is not the God of the dead but of the living. You are badly mistaken” (Mk 12:18-27).

The Sadducees posed this not so much as a question about marriage but as a way to make the teaching of the resurrection seem ridiculous.

The first thing to note is that Jesus speaks of marriage only in a passing way. His response to the question about the highly unlikely scenario is designed to teach solemnly on the reality of the resurrection of the dead. In His response, Jesus does not fully develop a teaching on the experience of spouses toward each other in Heaven.

Hence, we ought not to conclude that a long marriage in this world will have no meaning at all in the age to come. In heaven our body and our soul will be perfected. So, too, our fundamental relationships, both spousal and familial. They will not be discarded or simply forgotten. Surely those who are spouses here will experience a far more perfect union in Heaven. They will enjoy mutual understanding, love, appreciation, and spiritual intimacy far greater than they could even imagine. They will have this because they have it first and foremost with God; and with, in, and through God they will enjoy this perfected union with each other. The same would be true of our other familial relationships and bonds of friendship, to each according to what is proper and perfect. The married will enjoy this supremely, because marital bonds on earth receive special divine graces.

All the more shall we be bound to our departed spouses because we are destined to a better estate … to a spiritual partnership …. Consequently, we who are together with God shall remain together…. In eternal life God shall no more separate those he has joined together than in this life where he forbids them to be separated (Tertullian, On Monogamy, 10).

To be sure, some aspects of marriage do end with the death of a spouse. The marital vows that bind the couple to an exclusive relationship, forsaking all others, are only operative until death do them part. Thus, the death of a spouse permits the surviving spouse to marry again. In some cases, especially before the modern age, such marriages for widows or widowers were necessary for financial and familial reasons.

That a marriage ends by the death of a spouse speaks more to worldly realities than to heavenly ones. It still does not follow that one’s earthly marriage will have no meaning in Heaven. Even if a person remarries after the death of his/her spouse, surely both relationships will be perfected in Heaven, not discarded. As the relationships are perfect, there will be no jealousy or resentment between the first spouse and the second.

In His response to the Sadducees, Jesus surely does mean that there will be no new marriages in Heaven. There will be no wedding bells, no marriage ceremonies, for Heaven is already one grand marriage feast of Christ with His Bride, the Church.

Further, marriage is given here in this world for the sake of propagating the human race through having children. This need will not exist in Heaven, where there is no death. The Fathers of the Church emphasize this in their commentary on this teaching:

As for us living like the angels, the Lord speaks to immortality, but He also teaches that there will no longer be any need for sexual intercourse. This may seem like a drawback to some people, particularly in this hypersexualized age, but the intimacy between spouses in Heaven will be far greater than any mere physical union. When a great joy comes between spouses it eclipses lesser ones. Here too, the Church Fathers affirm this meaning:

Married couples should look forward to a relationship that is perfected in Heaven, not set aside. While the juridical aspects of marriage may end at death, the union of hearts and lives will not. In Christ there surely remains a spiritual connection and covenantal union that stretches from Heaven to earth through prayer, and in Heaven the Lord will surely perfect what He joined on earth, giving spouses unimaginable joy and unity.

Set me as a seal on your heart,
as a seal on your arm.
For stern as death is love,
relentless as the nether world is devotion;
its flames are a blazing fire.
Deep waters cannot quench love,
nor floods sweep it away.
Were one to offer all he owns to purchase love,
he would be roundly mocked (Song of Songs 8:6-7).

Cross-posted at the Catholic Standard: Will Marriages Be Acknowledged in Heaven?

17 Replies to “Will Marriages Be Acknowledged in Heaven?”