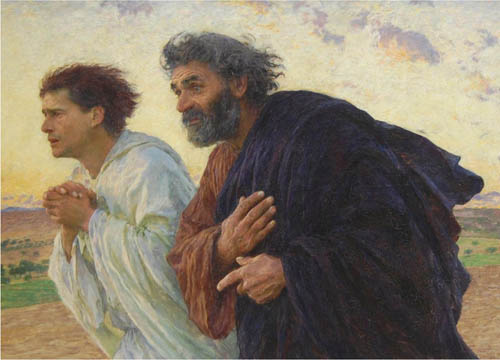 One option for the Gospel for Easter Sunday morning is from John 20:1-8. And like most of the resurrection Gospels it paints a portrait of a journey some of the early disciples have to make out of fear and into faith. It shows the need to experience the resurrection and then come to understand it more deeply.

I have blogged before on the Matthean gospel option for Easter Sunday morning (HERE). This year I present John’s. Let us focus especially on the journey that St. John makes from fear to faith. While the Gospel begins with Mary Magdalene, the focus quickly shifts to St. John. Lets study his journey.

I. REACTION MODE – The text begins by describing every one is a mere reaction mode, quite literally running about in a panic! – The text says, On the first day of the week, Mary of Magdala came to the tomb early in the morning, while it was still dark, and saw the stone removed from the tomb. So she ran and went to Simon Peter and to the other disciple whom Jesus loved, and told them, “They have taken the Lord from the tomb, and we don’t know where they put him.”

Notice that the text describes the opening moments as “still dark.” And it is likely that John is doing more than giving us the time of day. The deeper point is that there is still a darkness that envelopes everyone’s mind.  The darkness makes it difficult for us to see and our fears and our sorrows can blind us.

Therefore also notice that she looks right at the evidence of the Resurrection but she presumes and concludes the worst: grave robbers have surely come and snatched the body of the Lord! It doesn’t even occur to her to remember that Jesus had said that he would rise on the third day and that this was that very third day. No she goes immediately into reaction mode, instead of reflection mode. Her mind jumps to the negative and worst conclusion and she, by reacting and failing to reflect looks right at the blessing and sees a curse.

And often we do this too. We look at our life and see only the burdens instead of the blessings. And thus:

Yes, every day ten million things go right and a half a dozen things go wrong. What will you focus on? Will we look right at the signs of our blessings and call them burdens, or will we bless the Lord? Do we live lives that are merely reactive and negative, or do we live reflectively, remembering what the Lord says, that even our burdens are gifts in strange packages. Romans 8 says, And we know that all things work together for good to them that love God, to them who are the called according to his purpose. (8:28)

Do we know this, or are we like the disciples on that early morning, when it is still dark, looking right at the blessings but drawing only negative conclusions, reacting and failing to reflect?

II. RECOVERY MODE – The Text goes on to describe a certain move from reaction to reflection in a subtle way. The text says,  So Peter and the other disciple went out and came to the tomb. They both ran, but the other disciple ran faster than Peter and arrived at the tomb first; he bent down and saw the burial cloths there, but did not go in.

We start in reaction mode. Notice how Mary Magdalene’s anxiety is contagious? She comes running to the apostles, all out of breath, and says that “they” (whoever they are) have taken the Lord (she speak of him still as a corpse) and “we” (she and the other women who had gone out) don’t know where they put him (again she speaks of him as an inanimate corpse). And Mary’s panic and reactive mode, triggers that same reaction in the Apostles. They’re all running now!The mad dash to the tomb has begun.

But notice they are running to verify grave-robbery, not the resurrection. Had they but taken time to reflect, perhaps they would have thought to remember that the Lord had said he would rise on the third day, and this was the third day. Never mind all that, panic and running have spread and they rush forth to confirm their worst fears.

But note a subtlety.  John begins to pick up speed as he runs. And his speed, I would argue, signals reflection and hope. Some scholars say it indicates merely that he was the younger man. Unlikely. The Holy Spirit speaking through John is not likely interested in passing things like youth. Some of the Father’s of the Church see a greater truth at work in the love and mystical tradition that John the Apostle symbolizes. He was the Disciple whom Jesus loved, the disciple who knew and experienced that love of God. And love often sees what knowledge and authority can only appreciate and affirm later. Love gets there first.

There is also a Bible verse that I would argue decodes John’s  increasing strength as he runs:

But those who hope in the LORD will renew their strength. They will soar on wings like eagles; they will run and not grow weary, they will walk and not be faint. (Is 40:31).

Perhaps as John ran faster as he began to move from reaction to reflection and remembrance. When you run fast, even with others,  you can’t talk a lot. So you get alone with your thoughts. There is something about love that enlightens and recalls what the beloved has said. Perhaps John begins to think, to reflect and recall:

And something started to happen in John. And I have it on the best of authority that he began to sing in his heart as he ran:

I don’t feel no ways tired. Come too far from where I started from. Nobody told me that the road would be easy but I don’t believe he brought me this far to leave me.

Yes, John is in recovery now. He’s moved from reaction to reflection and he is starting to regain his faith.

The text says he looked in and saw the grave clothes, but awaited Peter. Mystics and lovers may get there first, but the Church has a Magisterium that must be respected too. John waits, but as we shall see he has made his transition from reaction to reflection, from fear to faith.

III. REASSESSMENT MODE – In life, our initial reactions must often be reassessed as further evidence comes in. And now, Peter and John must take a fresh look at the evidence from their own perspective. The text says, When Simon Peter arrived after him, he went into the tomb and saw the burial cloths [lying] there, and the cloth that had covered his head, not with the burial cloths but rolled up in a separate place.

Mary Magdalene’s assessment had been, in effect, grave robbers. But the evidence for that seems odd. Usually grave robbers were after the fine linens that the dead were buried in. But here are the linens and gone is the body! Strange.

And there is something even stranger about the linens. If it had been grave robbers they wouldn’t have taken time to unwrap the body of valuable grave linens. The Greek text uses the word describes the clothes as κείμενα (keimena) – lying stretched out in place, lying in order. It is almost as if the clothes simply “deflated” in place when the body they covered disappeared!

Not only that, but the most valuable cloth of all, the σουδάριον (soudarion) is carefully folded. Grave robbers would not leave the most valuable things behind. And surely, even if for some strange reason they wanted the body, they would not have bothered to carefully unwrap and fold things, and leaven them all stretched out in an orderly way. Robbers work quickly, they grab and snatch and leave disorder behind them.

And life is like this. You can’t simply accept the first interpretation of things. Every reporter knows that “in the fog of war, the first reports are always wrong.” And thus we too have to be careful not to jump to all sorts of negative conclusions just because someone else is worried. Sometimes we need to take a fresh look at the evidence and interpret it as men and women of hope and faith, as men and women who know that God will not utterly forsake us, even if he tests us.

John is now looking at the same evidence as did Mary Magdalene, but his faith and hope give him a different vision. His capacity to move beyond fearful reaction to faithful reflection is changing the picture.

We know little of the reaction of Peter or Mary Magdalene at this point. The focus is on John. And the focus is on you. What do you see in life? Do you see grave robbers? Or are you willing to reconsider and move from knee-jerk fear to reflective faith?

Does your resurrection faith make you ready to reassess even the bad news you receive and look for a blessing even in crosses?

IV. RESURRECTION MODE – And now, though somewhat cryptically we focus on the reaction and mindset of St. John. The text says, Then the other disciple also went in, the one who had arrived at the tomb first, and he saw and believed. For they did not yet understand the Scripture that he had to rise from the dead.

At one level the text says, plainly that St. John saw and believed. Does the text mean only that he believed Mary Magdalene’s story that the body was gone? Well, as is almost always the case with John’s Gospel, there is both a plain meaning and a deeper meaning. The context here seems clearly to be that John has moved to a deeper level. The text says he ἐπίστευσεν (episteusen) “believed.” The verb here is in the aorist tense, a verb form  that generally portrays a situation as simple or undivided, that is, as having perfective (or completed) aspect. In other words, something has come to fruition in him.

And yet, what the text gives, it also seems to qualify, saying, they did not yet understand the Scripture that he had to rise from the dead. It is as if to say, “John came to believe that Jesus had risen, though he had not yet come to fully understand all the scriptural connections and how this had to be. He only knew in his heart by love and through this evidence that Jesus was risen. Deeper understanding would have to come later.

But for our purposes, let us observe that St. John has gone from fear to faith. He has not yet seen Jesus alive, but he believes based on the evidence, and what his own heart and mind tell him.

And now, at this moment John is like us. He has not seen, but believes. Neither have we seen, but we believe. John would seem him alive soon enough and so will we!

We may not have an advanced degree in Scripture but through love we too can know he lives. Why and how? Because of the same evidence:

So we like John, see. We see not the risen Lord, not yet anyway. But we see the evidence and we believe.

St. John leaves this scene a believer. His faith may not be the fully perfected faith it will become, but he does believe. John has gone from fear to faith, from reaction to reflection, from panic to peace. This is his journey, and prayerfully, our too.

6 Replies to “From Fear to Faith in Four Steps: A Meditation on the Johannine Easter Gospel”