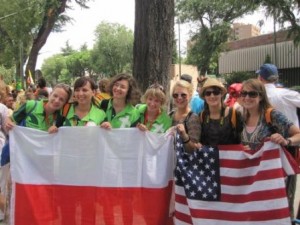 Pope Benedict arrived in Madrid today and we got to the streets super early, securing an excellent pope-viewing spot—second row, to be exact.  In ready position at 11am, we had two and a half hours to spare before Papa Ratzi (as the Italians have nicknamed him) was to complete his drive through the streets and finish at his Spanish dwelling, right across the corner from where we stood.  The hours were filled with time for reflection, people watching (my personal favorite), chanting and cheering, and befriending four Polish volunteers!  They taught us how to say “thank you” in Polish—Dziequje, pronounced JenKUya—as we ended up having to say that to them quite a few times…  We also had an opportunity to hear the girls’ studies in Warsaw and of course take pictures together!

Hearing the approaching cheers prompted by the Popemobile, we all then crowed as close to the barricades as possible and readied our cameras.  In front of us were standing three disguised protestors. Right as the Pope was about to pass, they open a large banner and hold it high, blocking everyone’s view behind them.  Understandably frustrated, we all tried to pull it down.  It was then that a policeman made them take the sign down and we were able to see the pilgrims across the street cheering violently at the protestors.  Only then did we realize the whole time these protestors had been under our nose since the beginning.  Eventually the policeman confiscated their banner, thank goodness!

So seeing the Pope in the Popemobile was not as uplifting as I expected, though a group member was able to reach her hand high above the banner and get a perfect video of the whole thing.  Reflecting back on the experience now, however, this is just one example of the persecution most Catholic youth go through daily.  And we stood all together through it all, success indeed.  Additionally, imagine what Christ endured carrying His cross to Calvary, a much stronger pain of persecution, as it puts into perspective just how much Jesus sacrificed to save us, the sinners.  Pope Benedict XI, the Vicar of Christ, does the exact same thing.

Next stop, the English speaking base in Madrid: the Love and Life Center.  Here we waited in line for almost 45 min for pizza and Coke (lunch was much needed) and then heard from panelists speaking on the Theology of the Body.  It was a wonderful experience to see so many other enthused youth and to hear from inspiring speakers such as Jason Everett.  But honestly, the best things about the event were as follows: air conditioning, English speaking people, and bathrooms.

Moving on to the welcoming celebration for the Pope, we had to again endure the absolute craziness of the metro crowds.  Waiting two or three times to get on a train is becoming normal.  The celebration was similar to the Pope’s entrance earlier in the day.  With constant cheering, standing, and another display of the Popemobile, the only difference was the increased mass of crowds.  Oh, and no protestors.  Welcomed and presented with a gift by a youth from each continent, Pope Benedicto, encouraged us to cherish friendships and to always participate in joyful celebration for the glory of God.

With sore feet and exhausted bodies after standing and walking the whole day, we returned home to discover a sudden second wind.  Laughing and taking ridiculous pictures as we reflected on many funny anecdotes from the day, our abs certainly got a workout.  God has showed his love by ending our tiring, up-down day on a good note.  He always figures out something if we just pay attention. Thank You, thank You, thank You!

One Reply to “Live from WYD – Dziequje by Elizabeth Lent”