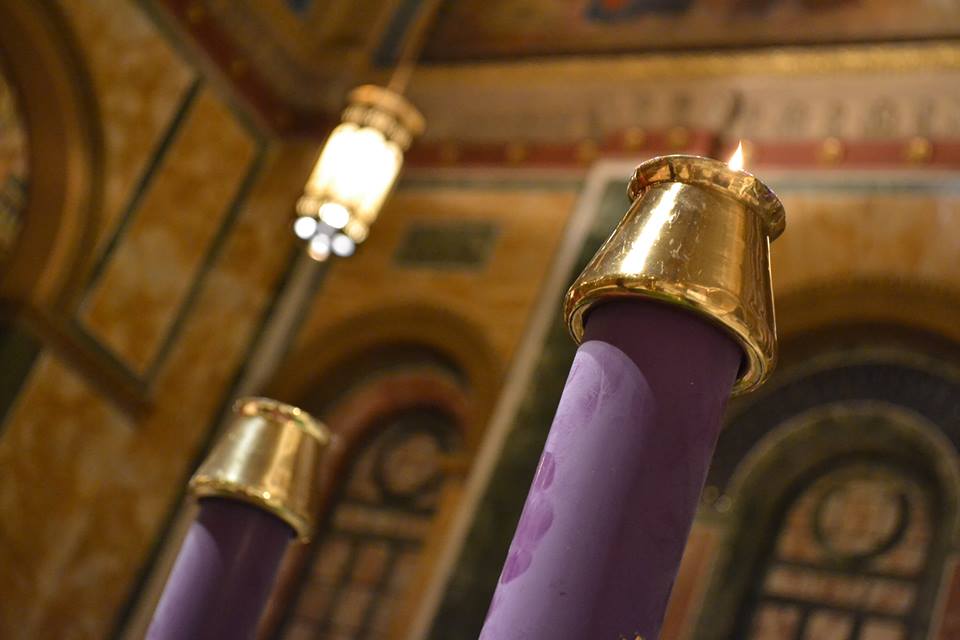 Today’s Gospel gives us some background for the Christmas feast that we need to take to heart. It speaks to us of a crisis at Christmas.

We tend to sentimentalize the Christmas story as we think of the baby Jesus in the manger. It is not absolutely wrong to be sentimental, but we must also be prayerfully sober about how difficult that first Christmas was, and about the heroic virtue required of Mary and Joseph in order to cooperate with God in making it come to pass.

Let’s look at this Gospel in three stages: distress, direction, and decision.

The marriage is off. When we read that Mary was found to be with child before she and Joseph were together, we need to understand how devastating and dangerous this situation was. Pregnancy in this circumstance  brought forth a real crisis for both families involved in Joseph and Mary’s marriage plans. Quite simply, it put all plans for the continuation of the marriage permanently off.

Why is this? We read that Joseph was a “righteous man.” To our ears this like saying that he was a “good man.” Most of the Fathers of the Church interpreted “righteous” here to refer to Joseph’s gracious character and virtue where he steps back from a sacred situation. And we surely suppose all this of him. More recent biblical scholarship includes the idea that it meant Joseph was also an “observer of the Law.” He would thus do what the Law prescribed. This explains his decision to divorce Mary because of her apparent lack of virginity prior to their coming together in the  marriage. Here is an example of the Mosaic Law in reference to such a matter:

But if the tokens of virginity were not found in the young woman, then they shall bring out the young woman to the door of her father’s house, and the men of her city shall stone her to death with stones, because she has wrought folly in Israel by playing the harlot in her father’s house; so you shall purge the evil from the midst of you (Deut 22:20-21).

While this seems quite extreme to us, we can also recognize how far we have gone in the other direction in modern times, making light of promiscuity. I doubt that anyone would argue that we should stone such a woman today, and rightly so, but this was the landscape in Joseph’s time.

What about stoning? It would seem that Jews of the first century had varying interpretations about whether stoning was required or whether it was simply permitted (cf John 8). As a virtuous and patient man, Joseph looks for and senses some freedom in not “exposing” Mary to the full effects of the Law (stoning). But it does not seem he can find a way that he can take her into his home. Thus, as a “righteous man” (i.e., follower of the Law) he decides that divorce is required even if stoning is not.

This leads us to two important reflections, one about Mary and one about Joseph.

Mary – We can see into what a difficult and dangerous position her yes (her fiat) to the angel placed her. She risked her very life by being found with child outside the normal marital act with her husband. We know that it is by the Holy Spirit she conceives, but her family and Joseph and his family do not yet, or at least cannot verify it. And even if Mary explained exactly how she conceived, do you think you would accept such a story? Mary’s fiat placed her in real danger. It is a great testimony to her faith and trust in God that she said yes to His plans.

Joseph – We can also see the kind of pressure he would be under to do what the Law and custom required. There is no mention of Joseph’s feelings at this point, but we can assume that when Mary was found to be with child prior to their being together in marriage, the social pressure on him to be legally freed from Mary were strong, regardless of his feeling or plans.

Be not afraid. The principal exhortation of the angel was that Joseph “not be afraid” to take Mary as his wife. This exhortation is powerful because fear was a very big factor. Joseph had much to fear in taking Mary. Some of the Fathers of the Church believed that what the angel meant was that Joseph should not fear God’s wrath, since he would not actually be taking an adulterer or fornicator into his home. Others think that the angel meant that Joseph should not fear taking God’s chosen instrument (Mary) as his wife.

One can also imagine some other fears that needed to be allayed by the angel. For example, Joseph could easily be rejected by his family for taking Mary in. The community could likewise shun him, and as a businessman, Joseph needed a good reputation to be able to ply his trade. All of these threats loom if Joseph “brings evil” into his house rather than purging the (apparent) evil from the midst of his house. But the angel directs him not to fear; this will take courageous faith.

The angel’s explanation is unusual to say the least. What does it mean to conceive by the Holy Spirit? It’s not exactly a common occurrence! Would his family buy such an explanation? What about the others in the small town of Nazareth? Yes, people were more spiritual in those days, but it all seems so unusual!

Further, Joseph hears all this in a dream. We all know what dreams can be like. They can seem so real at the time, but when we are fully awake we wonder if what we experienced was real at all. Joseph has to trust that what he was told is real, and that he should not be afraid because God has given him direction. As is often the case with things spiritual, we have to carefully discern and walk by faith, not by fleshly sight and certitude. Joseph has a decision to make.

We can see the strong faith of Joseph and the kind of trust he had to put in God. He had been told not to be afraid, to rebuke fear. Manfully, Joseph does this. He makes the decision to obey God whatever the cost. We are given no information about how his family and others in the town reacted. However, the fact that the Holy family later settles back in Nazareth indicates that God did come through on His promise that Joseph need not be afraid.

Heroes of Faith! Recognize the crisis of that first Christmas and the powerful faith of Joseph and Mary. Their reputations were on the line, if not their very lives. They had great sacrifices to make in the wondrous incarnation of our Lord. Quite simply, Mary and Joseph are great heroes of the faith. For neither of them was their “yes” easy. It is often hard to obey God rather than men. Praise God that they made their decision and obeyed.

Mary and Joseph’s difficulties were not yet over. There was a badly timed census, which required a journey to Bethlehem in the ninth month of Mary’s pregnancy. Imagine walking 70 miles through mountainous terrain in such a condition! There may or may not have been a donkey, but I doubt that riding a donkey in the ninth month of pregnancy is all that comfortable either. And then there was no room in the inn; Jesus had to be born in a smelly stable. Shortly thereafter they had to flee through the desert to Egypt because Herod sought to kill Jesus.

This is an old African-American spiritual that reflects on the fact that true discipleship isn’t always easy. Joseph and Mary surely experience and exemplify what these words express.