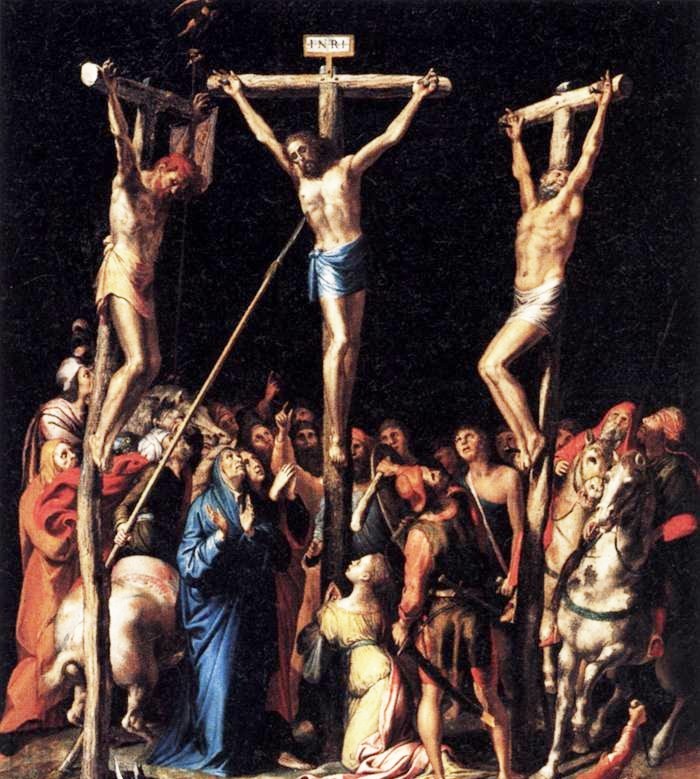 Although we are well into the Easter season, my mind harkens back to an event on Good Friday that has often puzzled me. What turned the crowd against Jesus? Recall that just six days earlier, on Palm Sunday, the crowds praised Him, acclaimed Him Son of David, and spoke of Him as a king and messiah. By the morning of Good Friday, though, they were calling for Him to be crucified. What turned them against Him?

My usual explanation was to suppose that the Temple leaders hired a crowd of ruffians and coached them on what to say. In other words, I conjectured that these were not the same people who welcomed Jesus on Palm Sunday but rather a carefully selected group assembled on the plaza in front of the governor’s residence (the Praetorium). While it may be true that the Temple leaders coached them, it still raises the question, how were they able to find so many people willing to turn against a man so widely admired and appreciated by the ordinary faithful?

Fr. Antonin-Gilbert Sertillanges gave a thoughtful and insightful analysis of this event and of the crowd’s motivation in his book What Jesus Saw from the Cross. Let us consider Fr. Sertillanges’ explanation of the mood of the crowd. (Note that he does notdiscount that many in the crowd may well have hailed Jesus as Messiah on Palm Sunday.)

At the beginning of his sacred ministry … Jesus had aroused intense enthusiasm …. [But now] what is the grievance? That the leaders of the Jews should have hated Jesus is perhaps intelligible, but the enmity of the crowd is most mysterious. It is only at the last moment that it becomes manifest, and then only under the stimulus of encouragement from the priests (pp. 157-158).

So, Fr. Sertillanges has pondered the mysterious shift in mood of the crowd. And while he notes that there was some stimulus from the Temple leaders, he does not presume that those leaders had gathered the crowd.

[On that Good Friday] morning the crowd assembled for reasons of its own. They have a right to have a prisoner released to them on this day and they are coming to claim that right. Perhaps they are thinking of Barabbas, perhaps of Jesus, who is just at this moment appearing before the tribunal. … Pilate [however] irritates them twice by referring jocularly to [Jesus] as “their king.” [And thus, Jesus now] arouses their division more than their pity: a messiah in chains before a Roman governor? This seems to be the kernel of the matter in the eyes of these Israelites, who were enthusiastic [on Palm Sunday], a few moments ago were in doubt, and now are suddenly hostile and furious (p. 158).

Now Father moves to the psychological shift that takes place:

Mobs do not like to be disillusioned; and the man who disappoints them may pass in a moment from the rank of a national hero to nothing, and even to less than nothing. … Think what a disillusionment it is for the Jews to see Jesus in this [scourged] condition before Pilate. … This is the Pauline “scandal of the cross” (p. 159).

From disappointment they pass to spite, from spite to anger, and under the ceaseless encouragement of their iniquitous leaders they are easily roused to exasperation. The word crosshas been spoken; it is taken up and repeated. … The taste of blood now begins to intoxicate the mob; a thrill of cruelty runs through them all. To any further questions or objections, the maddened crowd has only one reply, given with increasing violence: “Crucify him! Crucify him!” (pp. 159-160)

[And thus, Jesus departs the Preatorium] carrying all his blessings with him. As he processes along the way … the cruel gaiety of this day has gone to everybody’s head. Every savage instinct latent in the heart of man was awake; souls froth over with rage in this anticipatory delegation of those in every generation who would hate and oppose Christ vented itself in the cry of Satanic joy (p. 161).

Going even deeper into the cause of their disillusionment, Fr. Sertillanges ponders:

And yet, [at a deeper spiritual level] the problem still remains: how did this transformation which we have described become possible?

The mystics tell us that a great moral lapse is always preceded by hidden causes. [Some have noted that] the Jewish masses at that time were prone to mystical curiosity and superstitious practices. The success that Jesus achieved among the masses was due to the [messianic] interests of the moment and the enthusiasm aroused by his miracles, the fascination of his discourse, and to the sardonic satisfaction of hearing their leaders criticized and of seeing them defied …. [This explains their attraction to Jesus] more than a fully convinced adherence to Jesus and his teaching (pp. 161-162).

The people had become dazzled, not convinced, and their carnal expectations were disappointed. Jesus as a political Messiah … Casting off the Roman yoke, the abolition of taxes and the return of the Jews of the dispersal, this is what would have won them over. But the aims and the doctrines of the Savior were not of this kind; and this is the reason why, as soon as they see their selfish hopes disappointed, the crowd turned against him. Their favor becomes hostility (p. 162).

This is quite a rich examination of the puzzling shift in the mood of the crowd.To Father’s reflection I can only add that St. Paul calls the cross a stumbling block to Jews because Deuteronomy (21:23) says, “Cursed is everyone who hangs on a tree.” As they beheld Jesus horribly scourged, a prelude to crucifixion, they judge Him cursed by God and bitterly dismissed the idea that He could be the Messiah they hoped for.

There much to ponder in Fr. A.G. Sertillanges’ What Jesus Saw from the Cross. It is rich in history and spirituality and I highly recommend it for your reading.

6 Replies to “How Did Jesus Go From Being a Hero to Being Hated In Less Than a Week?”