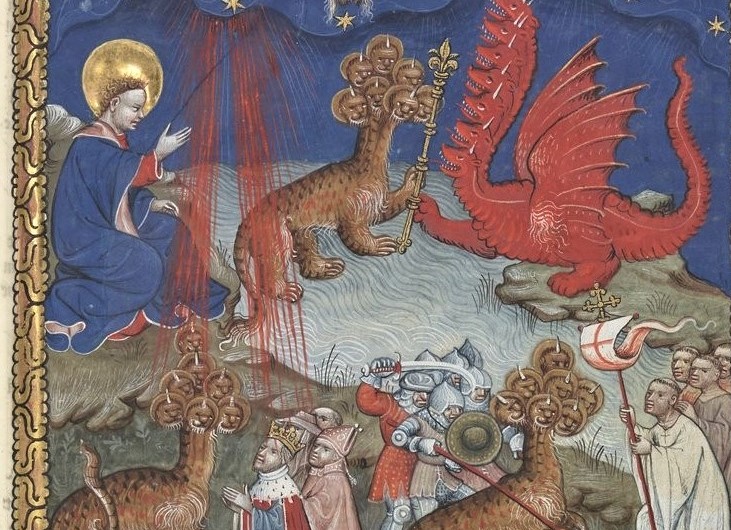 In the Office of Readings this Easter season, we are reading from the Book of Revelation. This choice might seem surprising, but there are good reasons for it.

While many suppose that the Book of Revelation is merely about the end of the world, it is about far more; it is also about what is happening right now. It was not written only for the end of the ages but for all ages. It is a book of glory that discloses the victory that Jesus has already won. Don’t get lost in lots of exotic theories; Revelation is a book of glory that prophetically declares what is really going on.

Its title in Greek is Ἀποκάλυψις Ἰησοῦ Χριστοῦ (Apokalupsis Jesou Christou), which literally means “The Unveiling of Jesus Christ.” It is as if Jesus is pulling back the veil to show us what is really going on. He shows us the great drama of history and tells us that He has already won the victory. He tells us that we should not lose heart while the dust settles, while the wheat is separated from the chaff and the harvest brought in.

We are too easily either mesmerized or terrified by our limited view of history. We think that life depends on which political party wins, or whether a cure is found for some disease, or whether world leaders can reach rapprochement. However, the battle is higher and deeper than our little sliver of the 21st century. It is far deadlier and is about more dramatic issues than what will happen to the GNP of the U.S. or which of the latest political theories will prevail.

I, John, your brother and partner in the tribulation and the kingdom and the patient endurance that are in Jesus, was on the island called Patmos on account of the word of God and the testimony of Jesus. I was in the Spirit on the Lord’s day, and I heard behind me a loud voice like a trumpet saying, “Write what you see in a book and send it to the seven churches, to Ephesus and to Smyrna and to Pergamum and to Thyatira and to Sardis and to Philadelphia and to Laodicea.” Then I turned to see the voice that was speaking to me, and on turning I saw seven golden lampstands, and in the midst of the lampstands one like a son of man, clothed with a long robe and with a golden sash around his chest. The hairs of his head were white, like white wool, like snow. His eyes were like a flame of fire, his feet were like burnished bronze, refined in a furnace, and his voice was like the roar of many waters. In his right hand he held seven stars, from his mouth came a sharp two-edged sword, and his face was like the sun shining in full strength. When I saw him, I fell at his feet as though dead (Rev 1: 10-17).

Yes, here is our Lord Jesus in His resurrected and conquering glory! At the name of Jesus every knee shall bend in the heavens, on the earth, and under the earth, and every tongue proclaim to the glory of God the Father that Jesus Christ is Lord (Phil 2:10-11).

The second part of the Book of Revelation calls the Church and us as individuals to repentance and perseverance. The cosmic battle reaches the Church and individual disciples. The battle is in the Church and in the heart of every person. Hence, the letters to the seven churches. We are not to lose the love we had at first. We must be willing to endure hardship and persecution. We are to reject the fornicators and all those who propose any sort of sexual immorality. We are to resist syncretism and every form of false religion. We must resist all the deep secrets of Satan; we must not be in any agreement with his ways. We must resist sloth and not fall back. We must resist lukewarmness and every sort of pride and self-satisfaction. The Church, clergy, and laity must fight the good fight, must persevere. We must endure hardship and always keep in mind the reward that awaits the courageous and the eternal disgrace that is coming to cowards and all who embrace the world, the flesh, and the devil.

John is then caught up into Heaven to see the glory of God and the heavenly liturgy. God has revealed to him what must take place soon. Historically, the Book of Revelation pointed to the destruction of Jerusalem and to the end of an era. Down through the ages, empires and nations have crumbled; eras and epochs have come and gone; only God’s Kingdom, as proclaimed and made sacramentally present by the Church, has survived or will survive.

Today we are arguably at the end of another era. The West is crumbling, and decadence abounds. Confusion about basic reality is so widespread that our current cultural situation can credibly be described as a lunacy. Even within the Church, voices that should speak out prophetically are infected by worldliness and silenced by fear. There is among Church leaders, clergy, and laity a widespread softness and a feeling that the risk of speaking out is too great.

The message of the Book of Revelation is a strong antidote to times like these, now, in the past, and in the future: be strong, be prepared, and be willing to suffer, realizing that no matter how powerful and glamorous evil may seem, Jesus is the victor. We must persevere and realize that we are swept up into a cosmic battle that is much larger than our current situation but that reaches us nonetheless. We must choose sides. Don’t think that you can sit on the fence. Satan owns the fence; he will come for you and say, “You belong to me.”

The seals, the bowls, and the trumpets of Revelation are but a further description of the cosmic battle and the wretched defeats that ultimately come upon the defiant and disobedient. God will not leave unpunished those who despise His Kingdom and His holy ones. These seven ordeals times three are a call to repentance to those who survive. They are also a manifestation of God’s justice and ultimate authority over history.

A crucial battle comes in Revelation 12, when the red dragon with seven heads and ten horns besets Mother Mary, who is also an image of the Church. However, the devil cannot prevail in the war that breaks out in Heaven. He is hurled to the earth, where he unsuccessfully pursues the woman (who represents both Mary and the Church). In a rage he continues to pursue us.

For the time being, the cosmic battle continues. Satan rages, for he knows his time is short. He is a big loser.

Even losers still have an odd ability to dupe and impress foolish, gullible people. So Satan still flashes the cash, makes empty promises, and dangles passing pleasures before us. Sadly, many of the worldly and unspiritual foolishly fall prey to his pomp and lies. Mysteriously, God permits this until the full number of the elect is gathered in.

Yes, it is good that we read the Book of Revelation. It is a pulling back of the veil, wherein the Lord tells us what is really going on and what the outcome shall be. He is telling us not to lose heart. “In this world you shall have tribulation, but have courage, I have overcome the world (John 16:33).

Be not dismayed, fellow Christians. Do not fear what is coming upon this world. Even if it is the end of the era, the Church has endured such sea changes before. Christ has already won the victory and has promised that the Church will remain indefectible. When the current foolishness has run its course, we will still be here preaching the Gospel, even if we have become a small remnant and are preaching from our prison cells!

Don’t get lost in the details of the Book of Revelation and miss its message of victory in the midst of persecution and trial. It is a call to persevere. It is a pulling back of the veil to show us what the end shall be! Be strong, be courageous, be certain. Jesus has already won the great victory in the cosmic battle. The dust is still settling, but know for certain that Jesus has won, and if you choose Him, so will you!

Regardless of what you think is going on, this is what is really going on. Choose sides. I urge you to choose Christ with courage. Don’t look back. Come what may, Viva Christo Rey!

Cross-posted at the Catholic Standard: The Book of Revelation is a Sure Guide to What is Really Going On