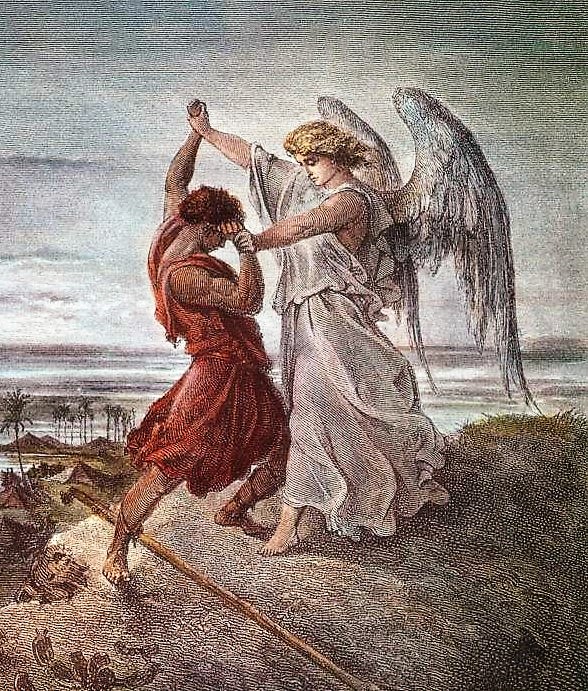 One of God’s stranger affections is the special love He had for Jacob of the Old Testament. We are reading through this story in daily Mass this week.

According to some, the name Jacob means “grabber” or “usurper.” Even while still in his mother Rebekah’s womb, Jacob wrestled with his twin brother, Esau. Although Esau was born first, Jacob came forth grabbing his brother’s heel, hence his name.

Although he was a “mama’s boy,” Jacob was also a schemer, a trickster, and an outright liar. Rebekah favored Jacob and schemed with him to steal the birthright from Esau by lying to his blind father Isaac and obtaining the blessing under false pretenses.

Esau sought to kill him for this, leading Jacob to flee north to live with Laban, an uncle who was an even greater trickster and schemer than he. For fourteen years Jacob labored for Laban, in the hopes of winning his beloved Rachel, Laban’s daughter. In a wonderful payback, Laban tricked Jacob into marrying Rachel’s “less attractive” sister, Leah, by hiding her appearance at the wedding. Jacob had thought he was marrying Rachel, but when the veil was pulled back … surprise! It would be seven years before Jacob would finally secure Rachel from Laban.

Frankly, Jacob deserved it. He was a schemer and was himself out-schemed by someone more devious than he.

Yet God still seemed to have a heart for Jacob. God loves sinners like you and me as well. In the story of Jacob—a hard case to say the least—God demonstrates that His love is not based on human merit. God knows and loves us long before we are born (cf Jer 1:5). His love is not the result of our merit, but the cause of it.

There came a critical moment in Jacob’s life when God’s love reached down and worked a transformation:

It was a dark and sleepless night in the desert. For reasons too lengthy to describe here, Jacob had reached a point in his life when he realized that he had to try to reconcile with his brother Esau. He understood that this would be risky and that Esau might try to kill him (he did not; they were later to be reconciled beautifully).

Perhaps this was the reason for Jacob’s troubled sleep. Perhaps, too, his desire to reconcile with his brother pleased God. Whatever the reason, though, God reached down to touch Jacob.

I.  DISTRESSED man – So the [peace] offering [to Esau] passed on before him; and he himself lodged that night in the camp. The same night he arose and took his two wives, his two maids, and his eleven children, and crossed the ford of the Jabbok. He took them and sent them across the stream, and likewise everything that he had. And Jacob was left alone; and a man wrestled with him until the breaking of the day (Gen 32:21-24).

Jacob is distressed and has difficulty sleeping. He has, somewhat willingly, sued for peace with his brother Esau so as to be able to return to his homeland. How his brother will react is unknown to him.

Our sins have a way of catching up with us. If we indulge them, sooner or later we are no longer able to sleep the sleep of the just, and all the promises of sin now become like overdue bills to be paid.

Now that Jacob has come to this distressed and critical place in his life, God goes to work on him, to purify and test him. On a dark and lonely night in the desert, Jacob finds himself alone and afraid, and God will meet him. Note three things about the way God works:

1.  God brings Jacob to a place of isolation – This is difficult for God to do. Oh, how we all love distraction, noise, and company. We surround ourselves with so many diversions, usually in an attempt to avoid considering who we are, what we are doing, where we are going, and who God is. So God brings Jacob to a kind of isolation on this dark and sleepless night in the desert. The text says, And Jacob was left alone. It’s time for Jacob to think, time for him to pray and look to deeper issues.

2.  God brings Jacob to a place of confrontation – Verse 24 says, and a man wrestled with him until the breaking of the day.

Who is this “man”? The Book of Hosea answers the question and also supplies other details of the event. He strove with the angel and prevailed, he wept and sought his favor. He met God at Bethel, and there God spoke with him—the LORD the God of hosts, the LORD is his name (Hos 12:4-5).

Yes, it is the Lord who wrestles with, who strives with Jacob. God “mixes it up” with Jacob and shakes him up. Here is an image for the spiritual life. Too many today think that God only exists to affirm and console us. He can and does do this, but God has a way of afflicting the comfortable as well as comforting the afflicted. Yes, God needs to wrestle us to the ground at times, to throw us off balance in order to get us to think, to try new things, and to discover strengths we did not know we had.

3.  God brings Jacob to a place of desperation – The text says, When the man saw that he did not prevail against Jacob, he touched the hollow of his thigh; and Jacob’s thigh was put out of joint as he wrestled with him (Gen 32:25).

It is interesting to consider that God “cannot prevail” over Jacob. Though omnipotent, God will not simply overrule our human will. Thus in striving with Jacob, God can only bring him so far. But God will leave him with a lingering memory of this night and with the lesson that he must learn to lean and to trust.

Jacob is a hard case, so God disables him. By knocking out Jacob’s sciatic muscle, God leaves him in a state in which he must lean on a cane and limp for the rest of his life. Jacob must learn to lean. He will never forget this lesson because he must physically lean from now on.

Thus Jacob, a distressed man on a dark desert night, wrestles with God and learns that the answer to his distress is to strive with God, to walk with Him, to wrestle with the issues in his life. Up until this point, Jacob has not trusted and walked with God. He has schemed, manipulated, and maneuvered his way through life. Now he has learned to lean and to trust.

II.  DEPENDENT man – The text next records, Then the man said, “Let me go, for the day is breaking.” But Jacob said, “I will not let you go unless you bless me.”

If “the man” is God, as the text of Hosea teaches, then it seems odd that God would ask Jacob to let him go and for Jacob respond, “I will not let you go.” As if a mere man could prevent God from doing anything!

But the request of “the man” may also be understood as a rhetorical device, drawing from Jacob the required response. So the man says, “Let me go!” God wants Jacob (and us) to come to the point at which he (and we) say, “I will not let you go.”

In saying, “I will not let you go,” Jacob is finally saying, in effect, “Don’t go; I need your blessing! Lord, you’re my only hope. I need you; without you I’m sunk!”

God needs to get all of us to this place.

This critical moment has brought Jacob to the insight that he must have God’s blessing, that he wholly depends upon God.

III.  DIFFERENT man – The text then says, And the man said to him, “What is your name?” And he said, “Jacob.” Then he said, “Your name shall no more be called Jacob, but Israel, for you have striven with God and with men, and have prevailed” (Gen 32:27-28).

Here is the critical moment: Jacob finally owns his name. When his blind father Isaac had asked him his name, Jacob had lied, saying, “I am Esau.”

Thus Jacob makes a confession, acknowledging that all that his name implies of him has been true.

Having received this confession, God wipes the slate clean and gives Jacob a new name, Israel, a name that means, “He who wrestles or strives with God.”

Renamed, Jacob becomes a new man. He is different now; he is dependent. He will walk a new path and walk in a new way: with a humble limp, leaning on the Lord, and striving with Him rather against Him.

And thus Jacob (Israel) wins by losing! God had to break him in order to bless him, to cripple him in order to crown him. Jacob would never be the same again. He would limp for life, always remembering how God blessed him in his brokenness. Scripture says, A broken and a contrite heart, O God, thou wilt not despise (Ps 51:17).

Postscript – In the Book of Hebrews, there is a kind of picture of the “new man” Jacob has become: By faith Jacob, when dying, blessed both the sons of Joseph and bowed in worship, leaning on the top of his staff (Heb 11:21). Jacob limped for the rest of his life. He needed a staff to support him. He learned to lean.

There is a battle you can’t afford to win: the battle with God. Learn to lean and to delight in depending upon God. This is the story of Jacob’s conversion. How about yours?