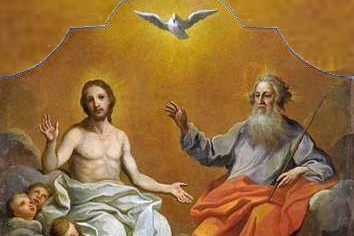 Many of you know that I write the Question and Answer column for Our Sunday Visitor. Given the celebration of Trinity Sunday this past Sunday, I thought I might reproduce here on the blog a question/answer regarding the Trinity. It is a fairly common question; perhaps you have it, too. Remember that my answers in the column are required to be brief.

We read in a recent Sunday Gospel (May 1, 2016) that Jesus says that the Father is greater than He (Jn 14:28). Since we are all taught that each Divine Person of the Blessed Trinity fully possesses the nature of God, equally to be adored and glorified, what did Jesus mean by such a statement?” – Dick Smith, Carrolton, TX.

Hence, Jesus proceeds from the Father from all eternity. He is eternally begotten of the Father. In effect, Jesus is saying, “I delight that the Father is the eternal principle or source of my being, even though I have no origin in time.”

Devotionally, Jesus is saying that He always does what pleases His Father. Jesus loves His Father; He’s crazy about Him. He is always talking about Him and pointing to Him. By calling the Father greater, He says (in effect), “I look to my Father for everything. I do what I see Him doing (Jn 5:19) and what I know pleases Him (Jn 5:30). His will and mine are one. What I will to do proceeds from Him. I do what I know accords with His will.”

St Thomas speaks poetically of the Trinity as follows:

(To the One Who Begets, and to the Begotton One, and to the One who proceeds from them both, be equal praise.)

The Father is made by none, neither created nor begotten.

The Son is of the Father alone, neither made nor created, but begotten.

The Holy Spirit is of the Father and of the Son, not made, nor created, nor begotten, but he proceeds from them.

So although equal, processions do have an order. The Father is “greater” (as source), but is equal in dignity to Son and Holy Spirit.

Please consider subscribing to Our Sunday Visitor. I also write for the National Catholic Register. These are two great publications that deserve your support.

And while I am pointing out my “extra-blogical” activities, I also ask you to consider coming to the Holy Land in March of 2017 with me and Patrick Coffin of Catholic Answers.

6 Replies to “Why Does Jesus Call the Father Greater If We Teach That the Members of the Trinity Are Equal?”