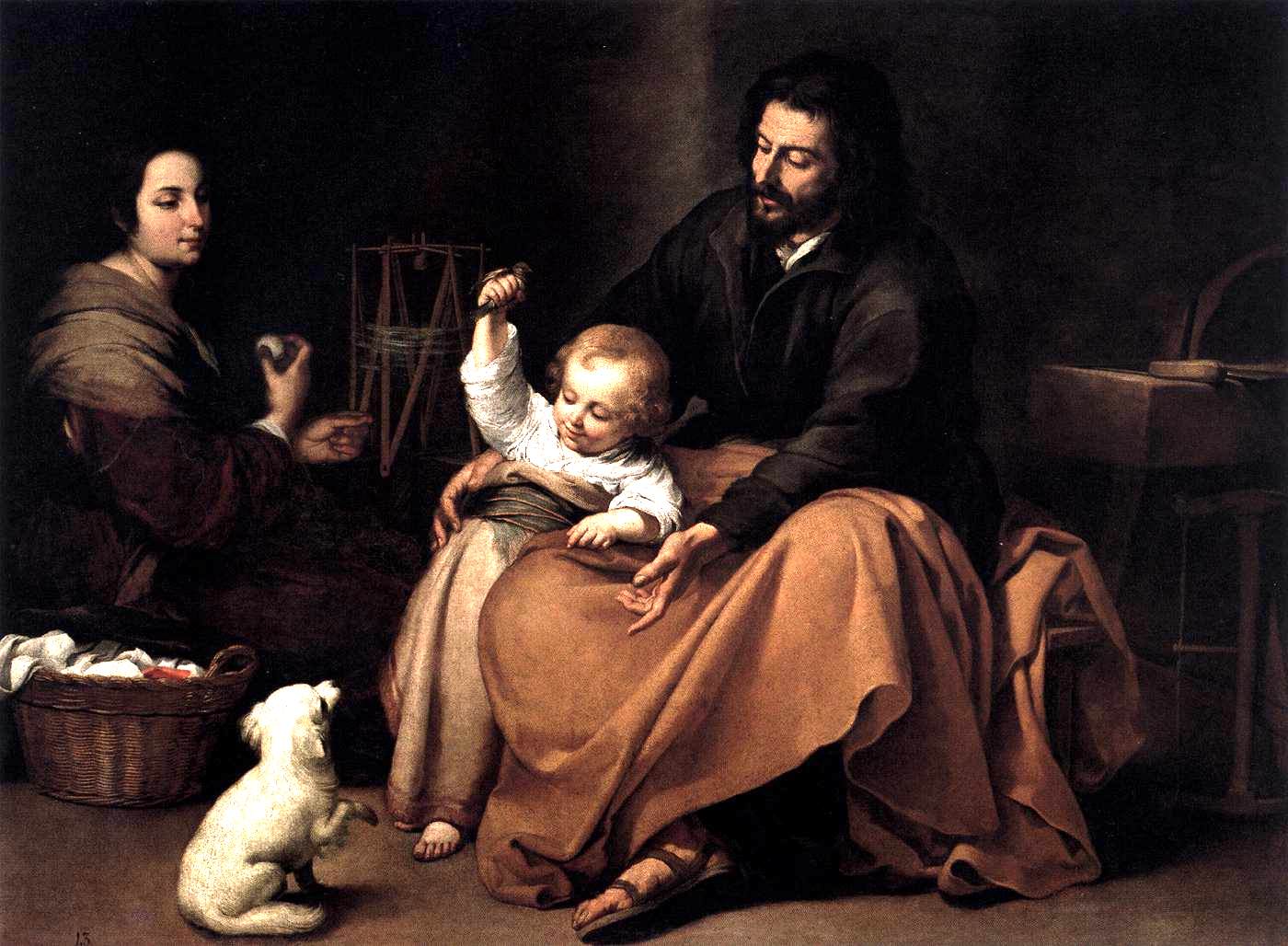 Here in the middle of the Christmas Octave, the Church bids us to celebrate the Feast of the Holy Family. On the old calendar, the feast of the Holy Family fell on the Sunday after Epiphany, which makes some sense. For it is a bit odd with the new calendar to read a gospel portraying Jesus at twelve years of age when we celebrated His birth just a few days ago. And then next week, on the Feast of Epiphany, we revert back to a gospel in which He is an infant.

Nevertheless, here we are. Perhaps it is a good time to reflect on family life. For at Christmas time, immediate and extended family often gather together. On this feast of the Holy Family, let us consider three things: the structure of the family, the struggles of the family, and our strategy for the family.

I. Structure – All through the readings for today’s Mass, we are instructed on the basic form or structure of the family.

And thus we see the basic structure of the family:

This, then, is God’s basic teaching on family and marriage. This is the basic structure that God sets for the family: a man who loves his wife; a woman who loves her husband; and children conceived within their stable, lasting, and faithful union of mutual support and love, and raised in the holy fear of the Lord.

Add to this the principal description of the book of Genesis, which describes how God sets forth marriage: A man shall leave his father and mother, cling to his wife, and the two of them shall become one flesh (Genesis 2:24). And to this first couple God gives the mandate, Be fruitful and multiply (Genesis 1:22).

And thus the Bible sets forth the basic structure for the family: a father, a mother, and children, all of whom are reverential and who support one another in their various roles and duties.

This much is clear before we even open the Bible. Both male and female influences are essential for the proper psychological and sociological development of a child. Clearly, then, God’s biblical mandate, that marriage should include both a father and a mother, is not without basis in simple human reason and common sense.

To intentionally deprive a child of this context is both unjust to the child and unwise. Hence, we see that the basic structure for marriage takes its shape from what is best for children. Both God and nature provide for a father and a mother, a male and a female, to conceive and raise a child.

It also makes sense based on simple human reasoning that the relationship should be stable, something upon which children can depend from day to day, month to month, and year to year throughout their formative years.

This, then, is the proper structure for marriage. It is set forth both by God and human reason.

II. Struggles – And yet what should be obvious to us as a culture seems to be strangely absent in the minds of many. Let us be clear: sin clouds judgment, making many think that what is sinful and improper is in fact good and acceptable. It is not. In our current culture we gravely sin against God and against our children through consistent misconduct and by the refusal to accept what is obviously true. The words of St. Paul are fulfilled in our modern times: their senseless minds were darkened, and they became vain and foolish in their reasoning (Rom 1:21).

It is clear today that the family is in grave crisis. It is also clear that it is the children who suffer the most. Our modern age in the Western world displays a mentality that is both deeply flawed and gravely harmful to children.

Marriage and family are in great crisis due to the willful, sinful behavior of the vast majority of adults in our culture in the areas of sexuality, marriage, and family life. The rebellion of adults against God’s plan has caused endless grief and hardship, and has created a culture that is poisonous to the proper raising and blessing of children.

Children have much to suffer in this world of our collective making. And while not all of us are equally guilty of contributing to their suffering, none of us is entirely innocent either, if for no other reason than our silence.

Consider that most children today are not born into the stable and lasting family unit they justly deserve, with a father and mother committed to each other till death do them part.

The problems begin with fornication, which is rampant in our culture today. And while most do not think of this as a sin of injustice, it is. This is so primarily because of what it does to children.

The fact is that many children today are conceived out of fornication. Tragically, most children who are thus conceived are outright murdered by abortion. Approximately 85% of abortions are performed on unmarried women. Despite all the claims that contraception makes every baby a “wanted” baby, nothing could be further from the truth. With the increased availability of contraception, abortion has skyrocketed. This is because the problem is not fertility; it is lust, promiscuity, fornication, and adultery. Contraception fuels these problems by further enabling them. The promises associated with contraception are lies; contraception does the opposite of what it promises.

Thus fornication and the contraceptive mentality (founded on lies) cause grave harm to children, beginning with abortion in huge numbers. And the children conceived of fornication who do manage to survive until birth are often subjected to the injustice of being born into irregular situations (e.g., households headed by single parents).

Add to this dismal picture the large number of divorced families. Make no mistake, these shredded families cause great hardship and pain for children. Children are shuttled back and forth between different households each week; they have to meet Daddy’s new girlfriend or Mommy’s new boyfriend; they endure all sorts of other family chaos. Blended families also dramatically increase the likelihood of sexual and emotional abuse because purely legal relationships seldom have the built-in protections of natural relationships.

All of this misbehavior, individual and cultural, harms children. Not being raised by parents in a traditional marriage dramatically increases a child’s likelihood of suffering many other social ills, starting with poverty.

Added to the burdens that children experience is the new trend of same-sex adoption. Never mind that it is best for the psychological development of a child to have both a father and a mother, a male and a female influence. No, what is best for children must be sacrificed on the altar of political correctness. Same-sex couples seeking to adopt must now be given equal consideration under the law (in many states) to heterosexual couples. It is the adults and their rights that seem to matter most here; what is best for children is quite secondary.

These, then, are our struggles. Our families are in grave crisis; most children in our culture today are not raised in the stable and committed homes they deserve. And let us be even more clear: to intentionally deprive children of this sort of home by raising them outside of marriage or in same sex unions is sinful, wrong, and an injustice.

Let us also be clear that it is not possible to personally judge every case of a broken family. The modern world has experienced a cultural tsunami and many have been influenced by lies and false promises. If you are divorced, it may be the case that you tried to save your marriage but that your spouse was unwilling. Perhaps in a moment of weakness, or before your conversion to Christ, you fell and bore children outside of marriage but since then have done your best to raise them well.

In the end, though, children in our culture have had much to suffer on account of adult misbehavior. We need to repent and to beg God’s grace and mercy for our grave sins of commission, omission, and silence. We have set forth a bitter world for our children to inherit.

III. Strategy – So what are we to do? Preach the Word! Whatever the sins of those of us in this present generation (and there are many), we must be prepared to unambiguously re-propose the wisdom of God’s Word to our children, grandchildren, and great-grandchildren. Even if we have fallen short, we cannot hesitate to announce God’s plan for sexuality, marriage, and family.

Back to the Bible! Back to the plan of God! Away with modern experiments and unbiblical schemes! God has given us a plan. And we, thinking we had better ideas, have caused great sorrow and hardship for our descendants. We have acted unjustly. We have murdered or children through abortion. By sowing in the wind we have caused those who have survived our misbehavior to inherit the whirlwind. It is time to repent and to help our heirs to rejoice in chastity, marriage, and the biblical family. Otherwise we are doomed to perish.

God’s plan must be our strategy in escaping from our struggles. We must get back to God’s structure for our families.