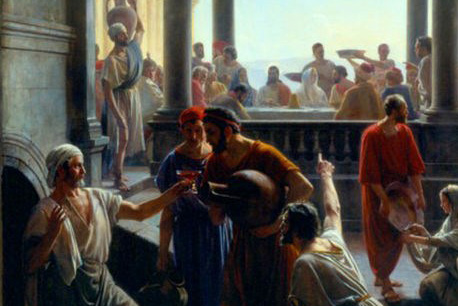 The word family had a wider meaning in both Aramaic and Hebrew than it does in English today. The Hebrew ah and the Aramaic aha could be used to refer to those who were brothers, half-brothers, cousins, and even other near relations. Extended family networks were both insisted upon and essential for survival. To have these ties and be dependent upon them was every Jewish person’s duty, and an absolute necessity for survival.

Marriage – Of course marriage is the heart of family. The very first order that God gave Adam and Eve was that a man should leave his father and mother cling to his wife, that the two of them should become one, and that they should increase and multiply. Ancient rabbis said a man really wasn’t a man at all until he did so. However, especially by the time of Christ, there were some men and women who lived celibate lives so as to be particularly free to serve God, whether by studying the Torah, teaching, or engaging in some great work for God’s people. Jesus and Paul seem to have been in this category. Jesus praised those who did so in Matthew 19 as did Paul in 1 Corinthians 7.

In the earliest years of Israel there seems to have been some tolerance for polygamy even though it was a departure from what God had set forth.  Many overlooked it given the urgent need to grow the family of God, the chosen people. Men were often killed in war and this led to an abundance of women who need husbands. Generally, only wealthier men could afford to have more than one wife. And although the Bible does not explicitly condemn the polygamists, it does show that polygamy led to intractable troubles, not necessarily between the different women involved, but between the sons over inheritance rights, etc. By the time of Jesus, polygamy among the Jews had greatly diminished if not altogether vanished. There is simply no mention of the practice in the New Testament. Jesus also summoned each man to love his wife and He prohibited other Mosaic leniencies in marriage. He re-proposed God’s original plan of one man and one woman till death do them part.

Call to marriage and engagement – Marriage took place at a very young age for the ancient Jews. Most rabbis proposed age 18 as most appropriate for men, though often a bit younger especially when war was less common. Young women married almost as soon as they were physically ready for marriage, approximately age 13 or 14.

In most cases, marriages were arranged by the parents for their children. However, there were exceptions to this and arranged marriages were seldom forced on young people who had absolutely no attraction to, or interest in, each other. Nevertheless, the insight in the ancient world, and even in many places today, was that marriage was not so much about love and romance as it was about survival. Further, it was not merely individuals who married but families that came together in mutual support. Beauty and romance, while considered pleasant things, were also known to be passing, and life and survival had to be based on sturdier foundations—so they were.

When a future bride had been chosen for a young man, either by his parents or more rarely by himself, there followed a period of one year called “betrothal.” During this time the couple still lived apart while delicate, often protracted negotiations went back-and-forth between the families as to questions of dowries, etc. The groom or his family paid the dowry to the father of the bride. The payment was made in recognition of the loss incurred by the bride’s family as a working member of the household went forth. It was also understood that some money should be set aside for the woman in case her husband were to die prematurely.

Marriage ceremonies – After the period of the betrothal was finished and all the agreements were at last reached and signed, the wedding could take place. Weddings typically extended over a period of five to seven days. Autumn was the best time for marriages: the harvest was in, the vintage over, minds were free, and hearts were at rest. It was a season when the evenings were cool and delightful and it was agreeable to sit up late at night. Usually the entire village gathered for a wedding.

At the beginning of the wedding feast, in the evening, the bridegroom, accompanied by his friends, went to fetch his betrothed from her father’s house. He would wear particularly splendid clothing and sometimes even a crown. A procession was formed under the direction of one of the bridegroom’s friends, who acted as the master of ceremonies and remained by his side throughout the rejoicing.

The bride was carried in a litter and in procession. She was beautifully dressed and along the way people sang wedding songs that were traditionally known and largely drawn from the Song of Songs in the Bible: Who is this coming up from the wilderness like a column of smoke, perfumed with myrrh and incense made from all the spices of the merchant? (Song of Songs 3:6) When the procession reached the bridegroom’s house, his parents bestowed a traditional blessing drawn from scripture and other sources. After the prayers, the evening was passed in games and dancing and the bridegroom took part in the festivities. But the bride withdrew with her bridesmaids and friends to another room assigned for her.

The next day was the wedding feast and once again there was general rejoicing and a sort of holiday in the village. There was a meal toward the end of the day at which the men and women were served separately. This was a time for the giving of presents, etc. The bride, all dressed in white, was surrounded by her bridesmaids, usually ten of them. She sat under a canopy while traditional songs and blessings were sung and recited. During this time, in the evening, the groom arrived. And while the exact ritual words are not certain, there seems to have been a dialogue between bride and groom recorded in the Song of Songs. The bride says, Let him kiss me with the kisses of his mouth— for your love is more delightful than wine. Pleasing is the fragrance of your perfumes; your name is like perfume poured out. No wonder the young women love you! Take me away with you—let us hurry! Let the king bring me into his chambers (Song 1:2-4). And the groom responds, Arise, come, my darling; my beautiful one, come with me. My dove in the clefts of the rock, in the hiding places on the mountainside, show me your face, let me hear your voice; for your voice is sweet, and your face is lovely (Song 2:13-14).

Now that the couple was together, all the other men and women also came together. It would seem that synagogue or other religious leaders imparted blessings to the couple, now together under the canopy. The words of these blessings and rituals are not definitively known and seem to have varied. After these came the evening feast.

Later on that first evening the couple vanished and the marriage was consummated.  The celebrations often went on for several more days. The couple did not going on a “honeymoon,” but remained for the rest of the celebration, sharing in the merriment, the songs, and the dancing under the star-strewn sky.

Here is Palestrina’s composition of Surge Amica Mea (Arise my beloved, my beautiful one and come). There is a wonderful musical onomatopoeia (a word that sounds like what it describes) in the opening word, “surge” (arise), as the notes run up the scale. Enjoy!