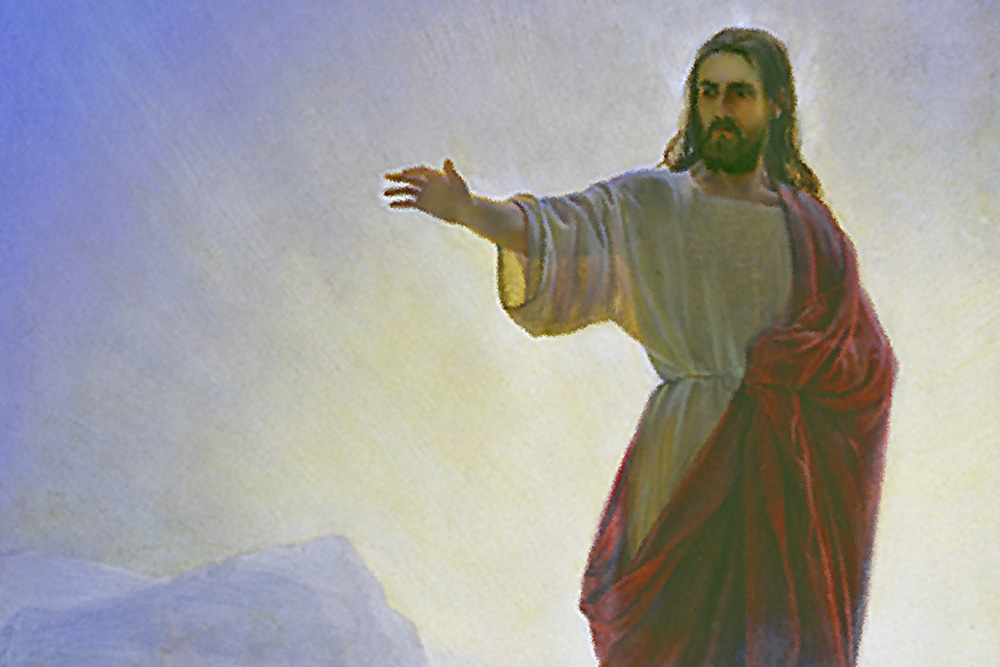 I was doing some sidewalk evangelizing with a group of fellow Catholics in my neighborhood last Sunday and a very angry African American Man confronted me with the accusation that we were unjust and lying because the Image of Jesus on our banner looked European. He explained to me that everyone knew Jesus was Black and African and that we were therefore lying and misrepresenting Jesus.

For the record, the image we had on our banner was an icon, generally with Eastern European features, but like most Icons, of darker complexion and ambiguous as to nationality.

But never mind, He saw it as white because it wasn’t clearly black or possessed of African features. I told him that we really don’t know exactly how Jesus looked and that it was fine to see him with African features, or eastern or really anyway. I also asked him to notice that many of us there on the sidewalk were African American and that in our parish, which I pastor, we had an African Christ on our processional cross etc. We made no real claim that our banner was what Jesus looked like exactly.

But at the end of the day he wasn’t really looking for a conversation, he wanted a confrontation. My own training tells me to end such dialogues quickly and look for more fertile ground. I assured him that we meant no offense and was sorry that he experienced offense, asked his prayers and politely disengaged from the conversation.

The very question, “What Did Jesus Look Like?” and our debates as to his features, says a lot about our modern age. And the silence of the Bible as to the physical appearance of most of its principal characters says a lot too.

We live in a very image driven culture. Ever since the invention of photography and especially television, the physical appearance of people has become quite significant. Perhaps the first real discernment of how important this had become was in the Nixon-Kennedy debate. Those who listened on radio generally thought Nixon won the debate. Those who saw it on TV thought Kennedy had won. And thus it was that physical appearance seems to have been greatly magnified as an assent or liability. It is surely true that physical appearance had importance before, but now it was magnified. Prior to the invention of photography, films and TV very few people had access to the physical appearance of influential people before they formed an opinion of them.

The fact that the Bible has so little to say about the physical appearance of Jesus or most of the main figures gives an indication that such facts were of less significance to the people of that time. It may also say something of God the Holy Spirit who chose not to inspire the recording of such information as a general rule. It would seem that physical attractiveness (or lack thereof) matters little to God? (I am hopeful in this department for my handsomeness has taken a serious hit in recent decades). Perhaps too the Holy Spirit draws back from such descriptions so that we would be encouraged to see ourselves in the narrative of Holy Scripture.

We get occasional references to physical traits. There are the some references to attractiveness. David is said to have a ruddy appearance, Leah seems to have been less attractive than her sister Rachael. Bathsheba surely drew David’s eye. There is also some mentioning of more specific traits. For example the beloved woman in the Song of Songs describes herself as “black” and “beautiful.” Sampson is said to have long hair. Zacheus is said to be of short stature. Herod was an Edomite, a name which refers to the reddish skin of that race of people. You will perhaps want to add to this list in the comments section. But overall the Scriptures are remarkably silent about any extensive physical description of the main protagonists. Who was tall, who was short, what color their skin or hair, or eyes? How long was the hair? Did the person have a beard?

And thus as we consider Jesus we are left with little from the scriptures themselves. It does seem clear that Jesus must have had a vigorous constitution given the extensive journeys he made throughout the mountainous region of the Holy Land. Lengthy walks of 60 miles or more back and forth from Jerusalem to Galilee and then well north to Tyre and Sidon. Climbs up steep hills and mountains such as Tabor were not for the weak or feeble. I have spoken more of the physical stamina of Christ here: On the Human Stature of Christ. But as for his hair color, relative height, skin tone etc. we have little or nothing.

I would like to speculate however based on a a few criteria of certain possible traits of Jesus’ physical appearance. Again, these are mere speculations. I encourage you to remark on them and to add or subtract as you see fit. These speculations are somewhat random and given here in no particular order.

1. The length of his hair. It is common since the renaissance to see Jesus depicted with long and straight or wavy locks of flowing hair. I have often wondered if ancient Jewish men ever wore their hair this long. I say this because St. Paul says, Does not the very nature of things teach you that if a man has long hair, it is a disgrace to him? (1 Cor 11:14). He goes on to speak of long hair as a “glory” to a woman. I wonder if Paul would have said such a thing if Jesus had the log hair he is often depicted with today? What exactly Paul meant by “long” is a matter for debate. It does not necessarily mean that Jesus went about with hair as short as some men wear it today. The Shroud of Turin, if it is authentic, shows the hair length to be at just about the length of the upper shoulder. I also doubt that Jesus’ hair would be as straight as many post renaissance artists depict it. If Jesus was a Semite, his hair was probably far more coarse and wiry than European hair. It is also interesting that some of the earliest images we have of Jesus on the Catacomb walls depicts him as clean shaven with short hair. But this may simply be a projection of Mediterranean standards upon him. Again, all these ponderings of mine are speculative.

2. What of Jesus’ complexion? If Jesus was of Semitic stock (a point which some debate) it would follow that his skin was not as dark as that of a sub-Saharan African but neither was it as light as a northern European. Many Scholars think that the ancient Semites had something of an olive tone to their skin, generally dark colored hair that was thick and often wiry or curly. The picture at left was developed by scholars recently using forensic techniques on a skull found from the first century AD. While the skin tone and hair are more speculative, the appearance of the face is based on the techniques of forensic reconstruction (cf HERE and HERE ). The image is not without controversy. Indeed there seem to be significant differences among scholars as to both the origin, appearance and general anthropology of the Semites who likely descended from Noah’s son Shem according to the Scriptures. Here again, I present these aspects of appearance to you only as speculative.

3. The Shroud of Turin – You have likely read much on the shroud. There is wide consensus today that the shroud comes from a period far earlier than the Middle Ages as was held in the 1980s when some questionable studies were conducted on it. Even if it dates from the time of Christ, this still does not prove it is his image. However the seemingly miraculous manner of the imprinting of the image is strong evidence not to be lightly set aside that this is in fact Christ’s image. Even if it is we have to be careful to remember that he had been savagely beaten and that this may have marred his appearance left on the shroud. Nevertheless, if this is Jesus’ image then we can see that he was 5-feet-10 to almost 6 feet tall and weighed about 180 pounds, had a fairly strong muscular build and a long nose seemingly typical with the Jews of his day. We have already remarked on the length of the hair and, despite Paul’s remark, his hair as depicted on the Shroud was worn a bit longer than most men of today.

Perhaps we do well to end where we began and question our own modern preoccupation with the physical appearance of Jesus and other biblical figures. It is true we are visual and will always prefer to see the face of those we love. But the Bible’s silence on these matters may be instructive and we do well to consider that the Scriptures invite us to look deeper than appearance, deeper than race or ethnicity. The Word became flesh in Jesus, but the Word must also become flesh in us and we must learn to find Christ in the Sacraments (cf Luke 24:31,35), in the poor, in our neighbor, our enemy, our very selves.

This video is one of the most extraordinary I’ve seen using a fascinating technology to show the many ways Jesus has been depicted down through the centuries. The images melt and morph into one another!

The Real Face of Jesus on HISTORY 3/30 by HistoryChannel

53 Replies to “What Did Jesus Look Like? And Why Do We care?”