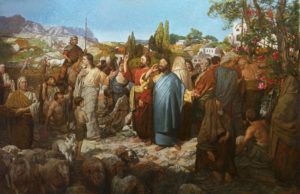 The Gospel from Thursday’s Mass (Thursday of the 20th Week of the Year) contains one of the most shocking parables Jesus ever told. It is the Parable of the Wedding Feast from the Gospel of Matthew, and it tells the story of a king who gives a wedding banquet for his son. Most know it well, but in case you want to review it, the full text is available here: Parable of the Wedding Feast.

It does not take a degree in biblical theology to understand that this parable is an allegory. The “king” is God the Father, the “son” is Jesus, and the wedding feast is the great wedding feast of the Lamb described in the Book of Revelation:

Then I heard what sounded like a great multitude, like the roar of rushing waters and like loud peals of thunder, shouting: “Hallelujah! For our Lord God Almighty reigns. Let us rejoice and be glad and give him glory! For the wedding of the Lamb has come, and his bride has made herself ready. Fine linen, bright and clean, was given her to wear.” (Fine linen stands for the righteousness of God’s holy people.) Then the angel said to me, “Write this: Blessed are those who are invited to the wedding supper of the Lamb!” And he added, “These are the true words of God” (Revelation 19:6-9).

The invited guests are the Jewish people of that time who, when the feast is ready, ignore or reject it for various reasons. Some guests express concerns for land (I just bought a farm) or profit (I own a business). And a group of them (for unknown reasons) lay hold of the king’s servants (who represent the prophets and, later, the Apostles), beating and even killing them.

This rejection represents not just the rejection by the Jews of history, but also the long human history of ignoring or rejecting God in favor of worldliness (land), profit (business), and hostility to the truth (the beating and killing of the king’s servants (the prophets and Apostles)).

And yet the focus is on the rejection by the Jews of the time, for the parable calls them the “invited guests.”

The reaction to their rejection, related by Jesus Himself, is that the king (God the Father) was enraged and sent his troops, destroyed those murderers, and burned their city (Matt 22:6).

This detail is especially shocking to many modern readers, because we have bought into a watered down notion of the holiness of God and the significance of human choice for or against Him. The common modern vision of the Father is that of a doting older man (like George Burns or Morgan Freeman) who exists more to get us out of trouble and offer friendly advice than to summon us to holiness, obedience, and a critical choice.

But take note: this detail of the king burning their city is told by Jesus Himself.  However we want to “rework” God and render Him harmless, however we want to try to oppose God’s love and justice, however we want to render human choice insignificant, the biblical text will have none of it. The bottom line is that no one loves you more than does Jesus Christ, yet no one warned of judgment and Hell more than He did.

Don’t be surprised if this parable shocks you; it is meant to do so. It is a call to sobriety in the face of the four most critical truths of our life: death, judgment, Heaven, and Hell. This parable teaches that we will either enter the wedding feast and celebrate with the Father or we will be caught up in the conflagration when the Lord comes to judge this world by fire (e.g., 2 Pet 3:7; Malachi 4:1; 2 Thess 1:7).

Add to this shock the fact that the parable was actually fulfilled in 70 A.D. (as a kind of precursor to the final end of the age) when, after forty years of pleading with the Jewish people to come to Christ, a fiery destruction came upon Jerusalem. After rejecting the Lord’s warnings (cf Matthew 24, 25; Mark 13; Luke 21), rejecting the call of the early Apostles and Church, and picking a pointless war with the Romans, the Jewish nation was utterly defeated. Jerusalem was sacked and burned and more than a million Jews were killed.

The choice is ours, but the judgment is certain to come: “God gave Noah the rainbow sign, no more water but the fire next time!” (Negro spiritual)

The only safe place to be is at the wedding feast of the Jesus the Lamb, who saves us from the wrath to come (1 Thess 1:10).

Jesus, with weeping, had warned,

Jerusalem, Jerusalem, you who kill the prophets and stone those sent to you, how often I have longed to gather your children together, as a hen gathers her chicks under her wings, and you were not willing. Look, your house is left to you desolate (Matt 23:37).

The next shocking part of the parable comes in the second half. The enraged king (God the Father) orders his servants to go into the streets and gather everyone they can. This detail represents going out to the Gentiles and the Great Commission.

Thanks be to God that the response is good and the banquet is filled. But then comes yet another shock:

When the king came in to meet the guests he saw a man there not dressed in a wedding garment. He said to him, ‘My friend, how is it that you came in here without a wedding garment?’ But he was reduced to silence. Then the king said to his attendants, ‘Bind his hands and feet, and cast him into the darkness outside, where there will be wailing and grinding of teeth.’ Many are invited, but few are chosen.

This makes us moderns wince. Perhaps part of our trouble with these verses is that we may think that the newly invited guests were dragged in right off the street with no chance to change clothes. But there is nothing in the text to suggest that they were not given time to don their wedding clothes. The other guests all seem to be clothed properly and the focus shifts to one man who is not properly dressed.

Whatever the debated cultural parameters of the story, the theological parameters are more clear. The wedding garment is provided by the king (God the Father), who clothes us in righteousness at our baptism.

For the wedding of the Lamb has come, and his bride has made herself ready. Fine linen, bright and clean, was given her to wear. (Fine linen stands for the righteousness of God’s holy people.) (Rev 19:8)

Yes, this is the baptismal gown, the robe of righteousness, which God gives to the baptized, who have been washed in the blood of the Lamb! In the Baptismal Rite, the celebrant points to the white garment of the newly baptized and says,

You have clothed yourself in Christ. Receive this baptismal garment and bring it unstained to the judgment seat of our Lord Jesus Christ, so that you may have everlasting life (# 578).

In the parable, the man is without a wedding garment not because he is poor or was pulled in off the street, but because he cast aside the garment he was given. Remember that the garment is no mere piece of cloth; it represents righteousness. And this righteousness is received and must be cherished. Without it, we cannot endure or remain at the Wedding Feast of the Lamb, which is Heaven.

Thus ends one of the most shocking parables Jesus ever told. (We will examine the “many are called but few are chosen” aspect of the text this coming Sunday.) And though the parameters of this parable do shock, Jesus speaks them with an urgent love to bring forth godly repentance from us and to stir an evangelical urgency in us to reach others before “Great and Terrible Day of the Lord” comes (cf Joel 2:31; Mal 4:5 inter al). On that day there will be only two places: safe at the wedding feast with the Lord or outside in the fiery judgment that is coming on this world.

“God’s gonna set this world on Fire one of these days.”

“I got a robe, you got a robe, all God’s children got a robe. When I get to heaven gonna put on my robe and go wear it all over God’s heaven! Everybody talkin’ bout heaven ain’t a goin’ there!”

Make sure you’ve got your robe and keep it washed in the blood of the Lamb.

One Reply to “I Got a Robe! A Teaching on One of the Most Shocking Parables Jesus Ever Told”