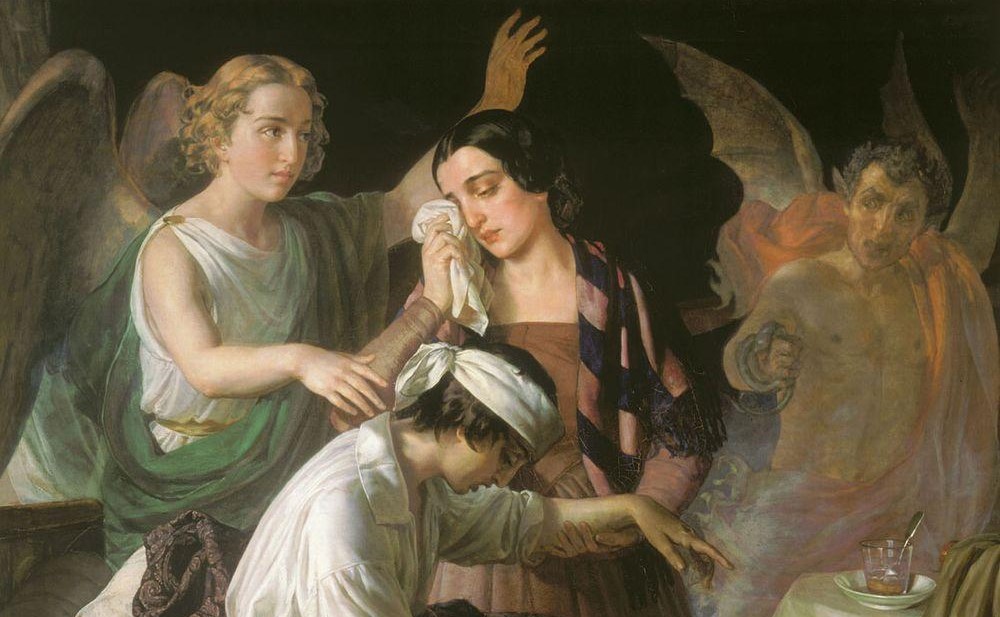 This is the third in a series of five posts on the angels and their role in our lives. The content of these posts comes from a series I have been teaching at the Institute of Catholic Culture on the mission of the angels. Angels are ministering spirits mystically present and active throughout creation, in the events of Scripture, in the liturgy, and in our lives.

The fundamental source for these reflections is Jean Cardinal Danielou’s book The Angels and Their Mission: According to the Fathers of the Church. The references to the Fathers in my posts are fully footnoted in his book, but some of the scriptural passages below represent my own additions.

In today’s post we ponder the existence of guardian angels and their role.

Scripture attests to the existence of guardian angels.

We begin with a text from Exodus in which the Lord says,

Behold, I am sending an angel before you to protect you along the way and to bring you to the place I have prepared. Pay attention to him and listen to his voice; do not defy him, for he will not forgive rebellion, since My Name is in him. But if you will listen carefully to his voice and do everything I say, I will be an enemy to your enemies and a foe to your foes. For My angel will go before you and bring you into the land (Exodus 23:20-23).

Though this text does not speak specifically to one’s personal guardian angel, it reminds us that not all guardian angels are personal; God also sets angels over nations, territories, and organizations. It is also clear from Scripture that local churches (dioceses) have angels. In the second and third chapters of the Book of Revelation the letters to the seven churches all begin in the same way. For example,

Some contend that the angels referred to in these letters to the churches are in fact the bishops of those churches, but most of the Fathers make a more literal interpretation. Some of them assert that the angel assigned to each local church is the invisible and spiritual double of the human bishop.

As for our personal guardian angels, there many references to them in scripture. For example, in the following text from Genesis, Jacob (Israel) blesses his sons, referring to his guardian angel in the process:

Psalm 91 speaks to the care of the angels for us:

For he will command his angels concerning you to guard you in all your ways. On their hands they will bear you up, lest you strike your foot against a stone (Psalm 91:11-12).

There is also this well-known passage in which Jesus refers to guardian angels:

See that you do not despise one of these little ones. For I tell you that in heaven their angels always see the face of my Father who is in heaven (Mat 18:10).

There is a text in The Acts of the Apostles in which an angel helps Peter to escape from prison; the community also refers to Peter’s angel:

Peter was sleeping between two soldiers, bound with two chains, and sentries before the door were guarding the prison. And behold, an angel of the Lord stood next to him, and a light shone in the cell. He struck Peter on the side and woke him, saying, “Get up quickly.” And the chains fell off his hands. And the angel said to him, “Dress yourself and put on your sandals.” And he did so. And he said to him, “Wrap your cloak around you and follow me.” And he went out and followed him. He did not know that what was being done by the angel was real, but thought he was seeing a vision. … When Peter came to himself, he said, “Now I am sure that the Lord has sent his angel and rescued me ….” He went to the house of Mary, the mother of John whose other name was Mark, where many were gathered together and were praying. And when he knocked at the door of the gateway, a servant girl named Rhoda came to answer. Recognizing Peter’s voice, in her joy she did not open the gate but ran in and reported that Peter was standing at the gate. They said to her, “You are out of your mind,” but she kept insisting that it was so, and they kept saying, “It is his angel” (Acts 12:6-15, selected).

Thus, we see the care of the angels for us in special ways as well as in an ongoing, personal way.

The Catechism of the Catholic Church confidently teaches,

From its beginning until death, human life is surrounded by their watchful care and intercession. Beside each believer stands an angel as protector and shepherd leading him to life. Already here on earth the Christian life shares by faith in the blessed company of angels and men united in God (CCC #336).

The Fathers of the Church attest to the existence of guardian angels and describe their roles.

Note that angels do more than protect and console; they also reprimand and punish, exhorting us to penance. The Fathers also generally assert that the angels assist in our prayer and transmit our petitions to God.

Here are some other terms used by the Fathers and/or in Scripture to describe the function of the guardian angel:

Opinion is divided over whether non-believers have guardian angels. St. Thomas says that they do but adds that the guardian angel has an entirely new role after baptism. Before a person’s baptism, Satan has certain “legal rights” over him and the angels can only set limits. Baptism reverses the situation and increases the power of the angel to defend.

We live in the midst of a supernatural world, a spectacle wherein everything that appears to be empty space is in fact filled with the angels. Yes, the angels surround us!

Be careful to remember that angels are our guardians, not our pets. We must respect and revere them, being immensely grateful for their ministry on our behalf. Each of us must listen to our angel’s voice, which echoes in our mind and conscience, and obey. We ought not to name angels because they are above us; we name those beneath us, for example, our children. When Samson’s parents asked the name of the angel who visited them, they were rebuked: Why do you ask my name? It is beyond understanding (Judges 13:18). We owe our guardian angels reverence, obedience, and joyful gratitude.

Angel of God, my Guardian dear,
to whom His love commits me here,
ever this day be at my side,
to light and guard, to rule and guide. Amen.

Cross-posted at the Catholic Standard: On the Role of Our Guardian Angels

2 Replies to “On the Role of Our Guardian Angels”