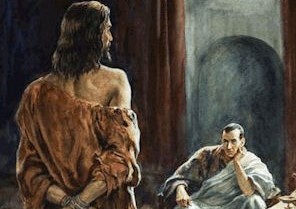 There comes a time when we must personally affirm what the Church has always announced: “Jesus is Lord, and He is King. He is my King. He has authority in my life.” This must become more than just lip service; it must become a daily, increasing reality in our life.

Kings take care of us, but they also have the authority to command us. Do we allow Christ to command us or are we more like the typical modern person who doesn’t like to be told what to do? Perhaps we suffer from the milder form of this attitude in which we reduce Jesus to a “harmless hippie” who just says pleasant things but would never rebuke us or insist upon our repentance.

Again, consider this question: “Is Jesus Christ your King?”

That brings us to Sunday’s Gospel. The Gospels aren’t theater; we’re not in the audience watching an ancient story unfold. No, we are in the story. We are not supposed to just sit back and observe what Peter, or Pontius Pilate, or James, or Mary Magdalene does. They are we and we are they.

This means that when Jesus asks one of them a question, we cannot merely wait to see how he or she will answer. No, we have to answer the question.

In the Gospel the spotlight is on Pontius Pilate. The Lord asks the critical question of him. We cannot simply wait to see how he answers; we have to answer. Let’s consider this Gospel in three stages.

I. INDECISION – In a remarkable display of literary artistry, John and the Holy Spirit vividly depict the vacillation of Pontius Pilate. In this Gospel passage of the trial of Jesus, Pilate goes in and out of the praetorium (the governor’s palace) more than a bellhop through the revolving door of a hotel! Indeed, he goes in and out seven times. Here is the text, with the portions describing his motions highlighted in bold:

So Pilate went out to them and said, “What accusation do you bring against this man?” . . . Pilate [re]entered the praetorium and called Jesus . . .  he went out to the Jews again, and told them, “I find no crime in him” . . . Then Pilate took Jesus [back into the praetorium] and scourged him. . . . Pilate went out again, and said to them, “See, I am bringing him out to you, that you may know that I find no crime in him.” . . . When Pilate heard [the crowd], he was the more afraid; he re-entered the praetorium and [spoke] to Jesus . . . Upon this Pilate [went back out] and sought to release him, but the Jews cried out . . . When Pilate heard these words, he brought Jesus out and he sat down on the judgment seat (John 18-19 selected verses).

Are we really so different from Pilate? Faced with a crucial decision, Pilate weighs the consequences that choosing Jesus will have on his career, his family, his loyalty to country and Caesar, and his access to power. While we may rightly criticize Pilate for his choice, don’t we make compromises with the world for the sake of similar things? How often does Jesus our King take a back seat to career, politics, convenience, and so forth? So easily do we stay rooted in vacillation, compromise, and indecision.

II. INQUIRY – In the midst of all this indecision, comes the question.

Pilate begins with his own question: “Are you the King of the Jews?” (John 18:33) Although it is Jesus who is on trial, He turns the tables on Pilate. Jesus effectively puts Pilate on trial by asking him a crucial question: Are you saying this on your own or have others been telling you about me?” (John 18:34).

It’s a remarkable question! Guess what … You have to answer it. Each of us has to answer it. Don’t wait for Pilate; he already gave his answer and faced judgment long ago. How do we answer it?

There is an old gospel song that says, “Yes, I know Jesus for myself.” Is that really the case with us? Too many of us are satisfied with a kind of inferential faith. Inferential faith is based merely on what others have said: we think or suppose that Jesus is Lord because our parents said so, or our pastor said so. This is a good beginning, for after all, faith comes by hearing (Rom 10:17), but there comes a moment when we have to say so. It is not enough that our parents say so or our pastor says so. Thus, Jesus is asking us right now, Are you saying [I am King] on your own or merely because others have said so?

What does it mean that Jesus is King? A king has authority, doesn’t he? Does Jesus have authority in our life? Do we have the obedience of faith (Rom 1:5) and base our life upon His will?

A king also takes care of his people and protects them. Do we allow the Lord to feed us with the Holy Eucharist? Do we allow Him to protect us from the poison of sin by the Sacrament of Confession and the medicine of His Holy Word? Are we willing to live within the protection of the walled city of His Church?

Is the Lord really our King? How do we answer? Is it just a slogan or is His Kingship real? Let the Lord ask one more time, Are you saying [I am King] on your own or have others been telling you about me?

III. IMPLICATION – We must answer. To refuse to answer is to answer.

A fascinating and wondrous literary device is used by John and the Holy Spirit in this Gospel passage. We have already seen how Jesus, who was Himself on trial, has turned the tables and effectively put Pilate on trial. Pilate, who has the duty to question Jesus, is now being questioned by Him. It is Pilate who must now make a decision, not so much about Jesus, but about himself. He has been asked a question that he cannot ultimately avoid, and now it is time to answer. Here is where the ingenious literary device comes into play. Look carefully at this passage from John’s Gospel and see if you notice anything strange about it.

Upon [the shouting of “Crucify him!”] Pilate sought to release Jesus, but the Jews cried out, “If you release this man, you are not Caesar’s friend; every one who makes himself a king sets himself against Caesar.” When Pilate heard these words, he brought Jesus out, and he sat down on the judgment seat at a place called The Pavement, and in Hebrew, Gabbatha (John 19:12-13).

What is strange here? Well, notice that when Pilate has Jesus brought out, it says that “he” sat down on the judgment seat. Who exactly is sitting on the judgment seat? One might think, Pilate, of course! Historically, that might be true, but the text is ambiguous as to exactly who “he” is. Most Scripture scholars argue that the line is supposed to be ambiguous.

Jesus has turned the tables on Pilate. Pilate is now on trial and the verdict is about to be revealed. Pilate seals his own fate when he hands Jesus over to be crucified; his vacillation is over. Pilate has made his choice; he has answered the question.

In this context it is Jesus who sits silently upon the judgment seat. The verdict is in. In deciding to hand Jesus over, in deciding to favor himself and the crowds over Jesus, Pilate has brought judgment on himself.

Too many of us have cartoonish notions about our final judgment: a benign Jesus giving us a great big hug, or an angry one gleefully passing judgment on His “enemies.” Perhaps there is also some notion of a review of our deeds, both good and bad, and then the pronouncing of some sort of verdict while we cringe and wait. Jesus is not a King who imposes His Kingdom. He invites us to enter into His Kingdom. Ultimately, judgment is about our choice, not His.

Judgment is finally this: The Lord, who suffered for us, quietly and respectfully sits on the judgment seat and accepts our final choice, a choice that is the accumulation all the choices we made in life, a choice that is now and forever fixed. Isn’t that what really happens?

The Lord has asked the question of Pilate, as he does of us. The choice is for Pilate to make and the judgment is one he brings on himself. His choice is either to accept the Lord’s Kingship or to reject it and watch Jesus led away while he (Pilate himself) stands alone, the judgment having been rendered by virtue of his own choice.

Yes, there are implications to whether we accept the Lord as our King or not. Today, the Lord asks us all if we will let Him be our King. To those of us who say yes, the Lord has this further question: “Are you saying this on your own or have others been telling you about me?” Is He really our King? Think hard about it. There are implications.

The question that we must answer has now been answered by Pilate. What is your answer?

2 Replies to “Is Christ Really Your King? A Homily for the Feast of Christ the King”