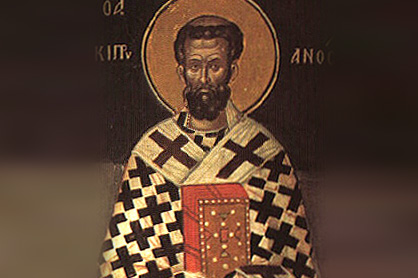 As November winds down and Advent still looms, the traditional meditation we make on the four last things (death, judgment, Heaven, and Hell) is still operative. A classic writing by St. Cyprian comes to mind. It is a meditation on the fundamental human struggle to be free of undue attachment to this world and to have God (and the things waiting for us in Heaven) as our highest priority.

In this meditation, St. Cyprian has in mind the Book of James and the Epistle of St. John. Yes, surely these dramatic texts are present in his mind as he writes. Hence, before pondering St. Cyprian, it may be good to reference these forceful and uncompromising texts:

You adulterous people, don’t you know that friendship with the world is hatred toward God? Anyone who chooses to be a friend of the world becomes an enemy of God … Draw near to God, and he will draw near to you. Cleanse your hands, you sinners, and purify your hearts, you double-minded (James 4:4,8).

The Lord Jesus, of course, had first said,

No one can serve two masters. Either he will hate the one and love the other, or he will be devoted to the one and despise the other. You cannot serve both God and Money (Matt 6:24).

Nothing is perhaps so difficult to imagine, especially for us moderns, as being wholly free of the enticements of the world. These texts, so adamant and uncompromising, shock us by their sweeping condemnation of “the world.” For who can really say that he has no love for the world?

We may, however, be able to find temporary refuge in some distinctions. The adulterous love of attachment and the preference for the world over its creator is certainly to be condemned. Yet surely the love for what is good, true, and beautiful in the world is proper. St. Paul speaks of those things “which God created to be received with thanksgiving by those who believe and who know the truth. For everything God created is good, and nothing is to be rejected if it is received with thanksgiving, because it is consecrated by the word of God and prayer” (1 Tim 4:3-5).

However, our distinction, though proper, cannot provide most of us with full cover, since we also know that the adulterous love of this world is still aplenty in our soul, however much noble love we also have. And the lust of the world is more than willing to sacrifice the good, the true, and the beautiful (not to mention God himself) for baser pleasures.

Only God can free us. And while some are gifted to achieve remarkable poverty of spirit long before departing this world, most of us are not ultimately freed from the lust of this world until God uses the dying process itself to free us. Slowly we die to this world as we see our skills, strength, and looks begin to fade as we age. And as old age sets in, we say farewell to friends, perhaps a spouse, and maybe the home we owned. Our eyesight, hearing, and general health begin to suffer many and lasting assaults; complications begin to set in.

For those who are faithful (and I have made this journey with many an older parishioner as well as some family members), it begins to become clear that what matters most is no longer here in this world, that our true treasure is in Heaven and with God. A gentle longing for what is above grows. For those who are faithful, slowly the lust of this world dies as we let God do His work.

Yet too many, even of those who believe, resist this work of God. While a natural fear of death is to be expected, too many live in open denial of and resistance to what is inevitably coming. Our many medicines and creature comforts help maintain the illusion that we can hold on to this world, and some people try to tighten their grip on it. A natural fear of death is supplanted by a grasping, clinging fear, rooted in a lack of faith and little desire for God.

And yet we expect to be rewarded with heavenly honors by him to whom we come against our will! Why then do we pray for the kingdom of heaven to come if this earthly bondage pleases us? What is the point of praying so often for its early arrival if we should rather serve the devil here, than reign with Christ.

John is most urgent in his epistle when he tells us not to love the world by yielding to sensual desires. Never give your love to the world, he warns, or to anything in it. A man cannot love the Father and love the world at the same time. All that the world offers is the lust of the flesh, the lust of the eyes and earthly ambition. The world and its allurements will pass away, but the man who has done the will of God shall live for ever.

As November ends but Advent begins, remember the four last things: death, judgment, Heaven, and Hell. Prepare to meet God eagerly; run toward Him with joy and confidence, calling on Him who made you for Himself. Death will surely come. Why not let it find you joyful, victorious, and confident—eager to go and meet God?

20 Replies to “Love of the World Fuels the Fear of Death – A Meditation on a Teaching of St. Cyprian”