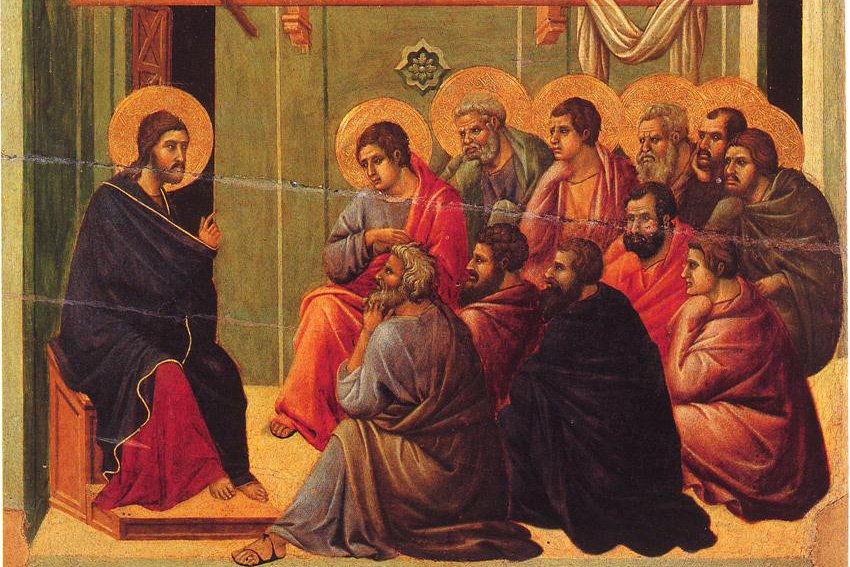 Monday’s decision by the Supreme Court not to take up numerous state appeals regarding same-sex unions pretty much signals that the secular redefinition is here to stay. This is really no surprise given the rather deep confusion about sexuality and marriage in our culture. The polygamists and any number of other groups demanding recognition for their aberrant notions of marriage are sure to follow with all due haste. And what is to stop them, legally, at this point? The word “marriage” is now largely meaningless since, if marriage can mean anything, marriage means nothing, in the linguistic sense. At my parish, we celebrate the Sacrament of Holy Matrimony and are retooling our documents with this new designation wherever possible.

While Jesus did not directly address the issue of same-sex “marriage” (since such a bizarre notion would not even have occurred to anyone in the Jewish world of his day), he did address the notion of illicit or unchaste unions. He did this in the “Matthean exception” (Matt 19 and Matt 5). While Jesus forbade divorce, He set aside or excluded certain unions that were illicit or unchaste and indicated that these were not unions to which one should cling. In effect, He said that they are not marriages at all so the term “divorce” does not apply to them and they should be set aside.

Consider the text from Matthew 19. Let me first present the text itself and then provide some background and interpretation. (I am using the Catholic NABRE translation.)

[Jesus said], I say to you, whoever divorces his wife (unless the marriage is unlawful) and marries another commits adultery (Matt 19:9).

The RSV (Catholic Edition) translates the passage this way: whoever divorces his wife, except for unchastity, and marries another, commits adultery.

Now the phrases, “unless the marriage is unlawful” and “except for unchastity,” are translations of the Greek phrase  μὴ ἐπὶ πορνείᾳ (me epi porneia). The usual meaning of the word porneia is “fornication” (i.e., sex between two unmarried people). However, depending on the context, porneia can also refer to other forms of sexual contact that are illicit or irregular by biblical standards. For example, many Greek lexicons (e.g., Strongs and Thayer & Smith) define porneia broadly as “illicit sexual intercourse” and then go on to define porneia to include fornication, homosexual activity, lesbian activity, sexual intercourse with animals, sexual intercourse with close relatives (as spelled out in Leviticus 18), or sexual intercourse with a divorced man or woman. Protestants tend to include adultery in the definition of porneia more so than do Catholics. The reason that Catholics in general do not is that there is another Greek word specifically for adultery: μοιχᾶται (moichatai). Therefore we do not consider adultery to be grounds for divorce based on either Matt 19 or Matt 5.

So, fundamentally, porneia most often means fornication (pre-marital sex) but can mean other illicit things as well.

Why then does Jesus utter this “exception” to the otherwise air-tight prohibition of divorce? The answer would seem to lie in the influence of certain Gentile notions, which the Lord wanted to be clear to exclude, at least in the settings Matthew recalled. The Gentile world was a very sexually confused—even depraved—world. All sorts of strange sexual practices were tolerated and even tied into some of the pagan religious practices. Gentile notions of marriage were often at wide variance with Jewish ones. Gentiles often called “marriage” what Judeo-Christians would call incest. There were also difficulties encountered with  homosexual behavior and other sexual liaisons that the Christian Church could not and would not recognize as legitimate or anything but sinful. (The most thorough discussion of this background can be found in the Navarre Biblical Commentary.)

So, in effect, Jesus is declaring that certain so-called marriages that featured porneia (some form of illicit sexual union) were not marriages at all, and that His forbiddance of divorce should not be seen as applying to these illicit unions. The implication is that since such unions were not considered marriage at all,  one could and should leave them without being guilty of divorce. The bottom line is this: there was a defined understanding of marriage that Jesus insisted upon, and He freely declared that just because someone called something a “marriage” didn’t make it a marriage.

Many today want to redefine marriage into something other than one man and one women in a fruitful (child-bearing) relationship until death do them part. I have little doubt, based on biblical evidence alone, that Jesus would declare such unions as “not marriages at all,” since He clearly set aside certain unions of His day by calling them unlawful, or more specifically, unchaste.

To those who would argue that Jesus did not specifically mention homosexual unions, I would point out, as already noted, that the term porneia can and does include all forms of illicit sexual unions: incest, fornication, and homosexual acts. Hence His use of the word here does include an exclusion of unions based on this form of unchastity.

As an aside, many today argue that Jesus never explicitly mentioned homosexual acts (though I’d like to point out that also didn’t explicitly say “Don’t beat your wife,” either) and they seek to conclude from His “silence” that He therefore would approve of homosexual acts. But of course Jesus does address the sinfulness of homosexual acts—through His appointed spokesmen, the Apostles, to whom He said, “He who hears you hears me” (Luke 10:16).  The New Testament teachings of the apostles, who speak for Jesus, clearly describe homosexual acts as sinful (e.g., Rom 1:18ff, 1 Cor 6:9; 1 Tim 1:8-11) and contrary to nature (paraphysin – Romans 1:26).

Hence, the term porneia (here understood widely as unchastity) surely does include homosexual acts (as any Greek dictionary will affirm). In the Matthean exception or exclusion, Jesus thus sets aside unchaste or illicit unions since they are not true marriages at all. Divorce does not apply to them and such unions should be discontinued since they are unchaste.