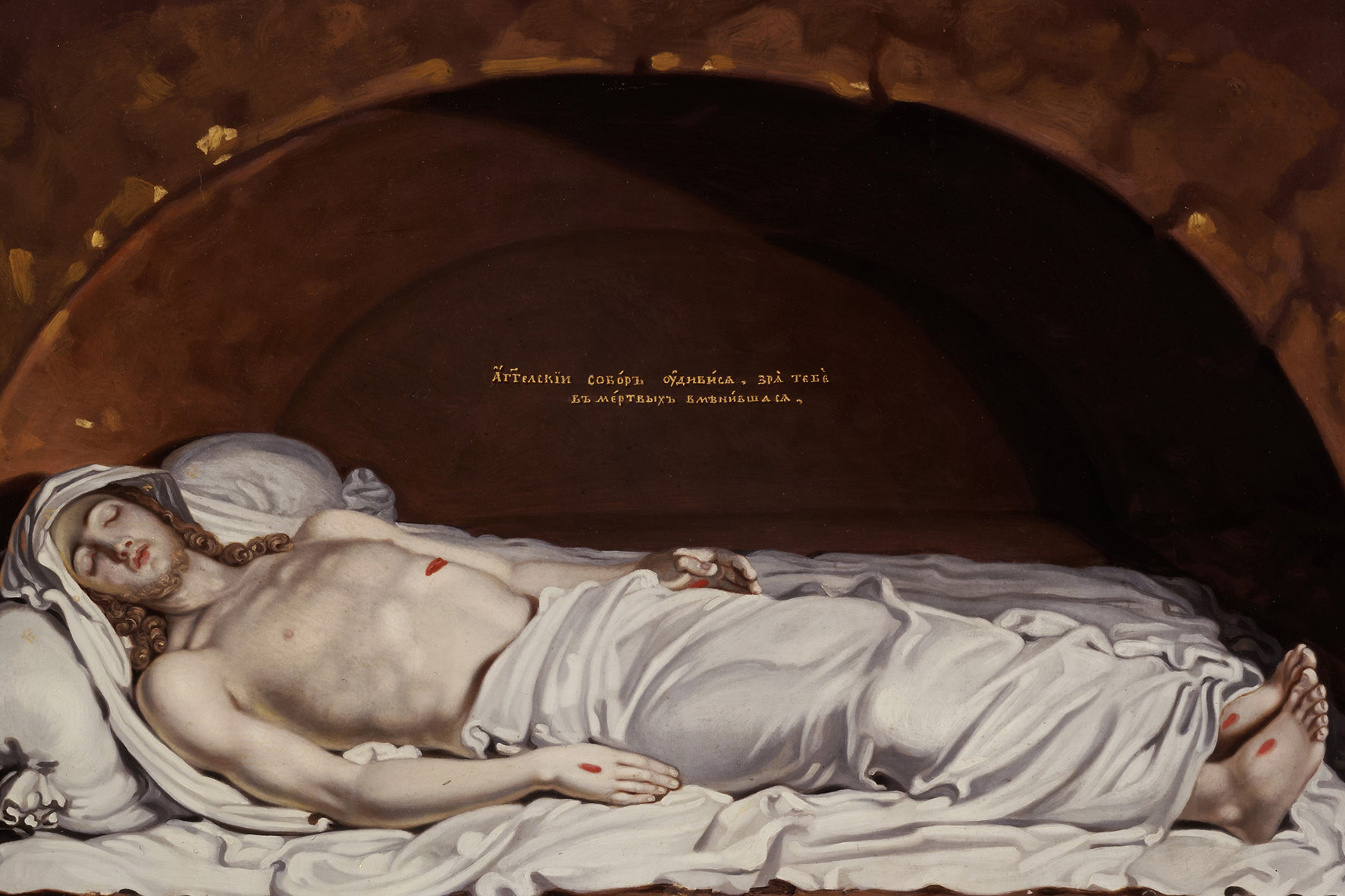 The Jewish people took the burial of the dead quite seriously; it was the way a community paid its last respects to the one who died. The Scriptures laid down quite firmly that no dead body was to be left unburied—even that of one’s worst enemy. Perhaps one of the stronger horrors that a Jewish person could imagine was stated in Psalm 78: They have thrown the bodies of thy servants as food for the birds of heaven; wild beast feast on the corpses of the just.

The dead, therefore, had a right to ceremonial care. As soon as a person was dead, his eyes were to be closed, he was to be kissed with love, and his body was to be washed (Genesis 50:1; Acts 9:37). In this washing, the body was anointed with perfumes. Nard was the most usual of these, but myrrh and aloes were also used.

By the time of Christ, the custom was that the body was elaborately wrapped in a shroud and the face was covered with a special cloth called a sudarium. The hands and feet were tied with strips of cloth.

Once this was done, relatives and friends could come to the home to say goodbye to the deceased for the last time. All of this happened in very short order; burial usually followed within eight hours of death. In such a hot climate, burial could not be delayed.

After this brief time during which the living could say their farewells to the deceased, the body was carried in a kind of litter to the grave. There were no professional carriers; the person’s relatives and friends took turns carrying the body as a sign of affection. Women led the procession and it was usually quite a noisy spectacle—even in cases in which the sorrow was not that great (such as in the case of a person who had died after a long illness). All funeral processions were expected to have those who wailed loudly and threw dust in their hair as well as flautists who played doleful music on their instruments. Given these expectations, families often hired professional mourners who assisted in the process.

The Jews never cremated their dead; indeed they had a revulsion for the practice since they believed in the resurrection of the body.

Cemeteries were always to be at least fifty yards outside of any town or village. The typical tombs of Jesus’ day involved a kind of cave or excavation cut into a rocky cliff. Sometimes larger families or groups of families would use these burial areas together. An opening in the side of a cliff might lead into a crypt of several rooms used by different families. There would be an outer and an inner chamber, or at least a front and back portion to the cave. In the outer chamber the body would be laid out on a kind of bench or shelf cut into the rock. After the final respects were paid, a large round stone was usually rolled into place (via a groove) to cover the tomb.

These large stones would often be whitewashed as a kind of warning to passersby that the area was in fact a gravesite. This was because Jews incurred ritual uncleanliness by coming in close contact with a dead body. Surely this could be endured as an act of charity for a dead relative, but one would not wish to incur it for a stranger. Thus the whitewashed tomb entrances served as a kind of warning to steer clear.

Very poor people, who could not afford a rock-hewn tomb, or foreigners who had no land were buried within vertical shafts in designated fields. In the Gospels there is reference to the purchase of the potter’s field as a place to bury the poor and foreigners who died in Israel (Mat 27:7).

A brief repast would follow and included the ritual drinking of wine and eating of the bread of mourning. For the very closest relatives (such as a wife, son, or daughter) mourning lasted for 30 days. This was observed by the wearing of special clothing, by refraining from wearing phylacteries during prayer, and by not answering greetings in the street. After about a year, family members would return to the tomb and collect the bones, placing them in a box called an ossuary. They would mark the box with identifying information and place it in the back room of the tomb where the bones of other relatives were also stored. This is the basis of the Jewish expression that the deceased “rested with his ancestors.” It also explains the concerns of the patriarch Joseph: Then Joseph took an oath from the sons of Israel, saying, “God will visit you, and you shall carry up my bones from here” (Gen 50:25). And Scripture says that as Moses left Egypt he took the bones of Joseph with him; for Joseph had solemnly sworn the people of Israel, saying, “God will visit you; then you must carry my bones with you from here” (Exodus, 13:19). And Scripture says that after entering the land, The bones of Joseph which the people of Israel brought up from Egypt were buried at Shechem, in the portion of ground which Jacob bought from the sons of Hamor the father of Shechem for a hundred pieces of money; it became an inheritance of the descendants of Joseph (Jos 24:32).

Thus Joseph rested with his ancestors. And so will we, until our bodies shall rise at the Last Trumpet.

9 Replies to “What were the Rituals Associated with Death and Burial in Jesus’Day?”