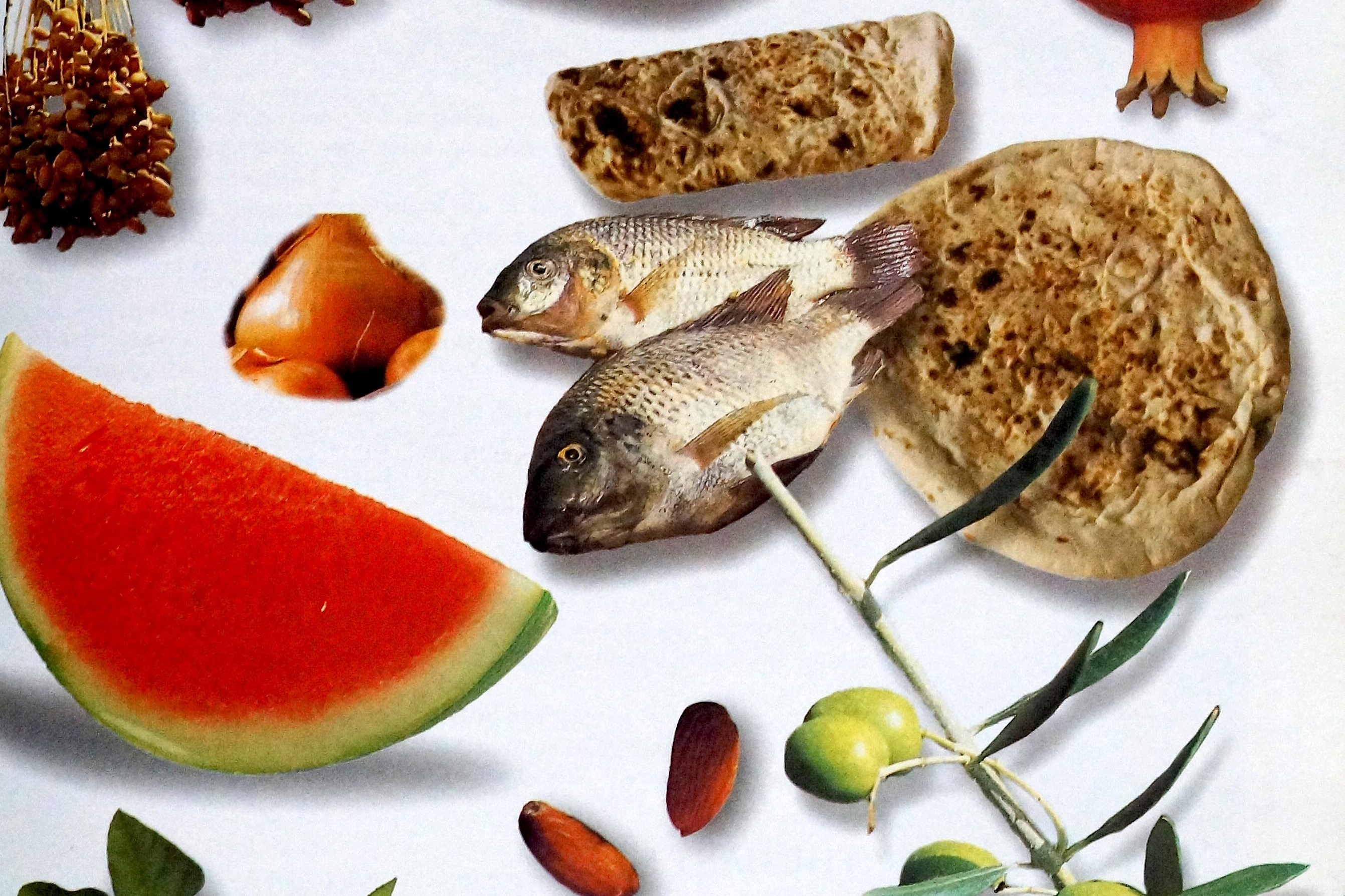 Generally speaking, the Israelites of the time of Christ were frugal eaters. Frankly, until about 100 years ago, frugality in eating was more imposed than chosen. Food was more scarce and less convenient than it is today. Its availability was seasonal and all the elements needed to be made from scratch; even water needed to be hauled in from wells, etc.

Bread was the essential, basic food. So basic was it that in Hebrew “to eat bread” and “to have a meal” are the same thing. Bread was treated with great respect and many rules existed to preserve that reverence. Any crumbs larger than about the size of an olive were expected to be gathered, never simply discarded. Bread was never to be cut, always broken. The poor ate barley bread, while the rich ate bread of wheat. Flour was made by grinding barley or wheat grains between two millstones.  This was done in the home, almost always by women. Then the dough was made and worked in kneading troughs. To make the heavy barley bread rise, women used very strong millets and barley yeast. The loaves were usually made round, and thus one spoke of “a round of bread,” or simply “a round.” Because bread would quickly become moldy, one would only bake enough for a day or two.

Corn (grain) – Though the Bible mentions corn, it has nothing to do with what we call corn today. Such a crop was unknown in the Middle East. “Corn” in the Bible refers to what we call grain today.

Milk – Cows’ milk was rare, and in any case it was not liked as much as the more common milk of ewe lambs and of goats. Since milk tended to spoil quickly, cheese making was very common.

Honey was the sweetener that was used for most things. Cane sugar was unknown in the Holy Land. The source of honey was bees, which were colonized as they are today. Sap from various trees and the thickened juice of grapes (jelly) were also common sweeteners. So much honey was made in the Holy Land that some of it was exported.

Eggs – As for eggs, very few of them were eaten. The thought of eating eggs was something brought into the Holy Land only from the outside, especially the East. Eggs tended to be food only for the very wealthy. Indeed, the eating of poultry at all seems to have come to Jewish regions only after the exile in Babylon (587 – 500 BC).

Vegetables – The diet of ordinary people included a great many vegetables, beans and lentils foremost on the list. Cucumbers as well were very much esteemed. Onions were very popular.

Meat – There was far less meat consumed than is the case today. Meat was a food of luxury and only the wealthy ate a great deal of it. Poor people never slaughtered an animal for their own eating except when there was a family feast. Generally when such a feast approached an older animal was chosen and fattened up by feeding it grain. Such an animal spent its last months eating well and working little so that its muscles were softer and fattier. Goats and lambs provided the most common meat, but occasionally a calf (i.e., a cow) was slaughtered. The animal was usually roasted. Chickens were scarce while pigeons and turtledoves were cheap. Game was much sought after but generally only the wealthy ate much of it. Deer and gazelle were considered kingly dishes and peacock was reckoned a great delicacy.

Fish – For most common people fish was more important than meat. A typical meal consisted of bread and fish. This is illustrated by the miracle of the loaves and the fishes as well as the meal at the lakeside in Galilee at which Christ prepared fish over a charcoal fire. The Sea of Galilee had great quantities of fish, and fish were also gotten from the Mediterranean Sea. Since fish soon went bad it was often salted. The consumption of fish was so great that some of it had to be imported.

Locust – One of the most surprising forms of food was the locust. (But perhaps it is no stranger than some of the things we eat today such as frog’s legs, snails, and live oysters.) An ancient Jewish document claims that there were 800 different kinds of edible locust. Sometimes they were cooked rapidly in salt water and had a shrimp-like taste and color. Usually the head and legs were removed. Sometimes they were dried in the sun. After being dried, some were ground down to a powder known as locust powder, which tasted rather bitter and was often mixed with flour to make a much-prized bitter biscuit.

Butter (oil) – Butter was rarely used; olive oil was much more common. So abundant were olives and olive oil, that the excess was exported. Many olives were eaten directly, but others had the oil pressed from them using an oil press at home (see left). Olive oil was highly prized and many passages in the Bible hold it up as a symbol of strength and health.

Fruit – Fruit had an important place in the people’s diet. They had many melons and figs along with pomegranates, blackberries, and dates. Since fruit was in abundance, it was often exported as well.

Nuts – Nuts were also in some abundance, especially walnuts, almonds, and pistachios. As is done today, they were often roasted.

As for seasonings and other condiments, the ancient Jews seemed to like their food strongly seasoned. There was salt in abundance from the Dead Sea area and it was used to preserve certain foods. Other common spices were mustard, capers, cumin, rue, saffron, coriander, mint, dill, rosemary, garlic, onions, and shallots. Pepper, however, was scarce and expensive as was cinnamon, both of which came from the Far East.

Salted – Without refrigeration, fish, meat, and some vegetables were preserved by salting or pickling them.

Pork was absolutely forbidden as was rabbit and any meat with blood still in it. Meat had to be carefully drained of all blood, for it was believed that life was in the blood and life belonged to God.

Drinks – People drank water when it was pure, and spring water was strongly preferred to well water. Milk and vinegar diluted with water were also consumed. Juice from pomegranates or dates was a favorite. And a kind of light beer was made from barley and millets.

Wine was a very important staple; it is said that God himself first showed Noah how it was made. Vineyards and grapes were in abundance in ancient Israel. The grapes were occasionally eaten directly but most of them went toward making wine. Psalm 103:15 says that wine is joy to a man’s heart. The book of Proverbs (31:6-7) also prescribes that there should be wine for the afflicted hearts. In Ecclesiastes 31:27 the author wonders what kind of life one could lead without it. Indeed, the vine was a symbol for Israel in the Scriptures. Since wine was considered sacred, it had to be kosher, that is, made only by Jewish hands. Only red wine that was consumed in biblical times; there is not even one mention of white wine. Wine was always spoken of as having the color of blood and thus it was a deep red or purple color. They kept wine either in tall jars or in wineskins (made out of the hides of goats) with wooden stoppers. Wine was filtered before it was consumed. Just as is the case today, there were different qualities of wine: some drier, some sweeter, some considered inferior, some more desirable. They drink wine out of metal goblets or earthenware mugs; although glass was known, it was scarce and expensive

Wine in moderation was considered a great blessing but the ancient Jews were also well aware that excessive wine could be dangerous. Scripture is full of warnings about drunkenness. Nevertheless, wine was often consumed in some quantity because the water was often not pure. When Paul told Timothy to drink some wine to settle his stomach, he was alluding to the fact that water alone tended to cause the stomach to be sore and inflamed and to bring about either diarrhea or constipation. Wine had the medicinal effect of helping kill water-born bacteria (of which the ancients knew nothing) as well as that of cheering the heart.

Food of course was very seasonal in its availability. And thus the diet would be affected by the harvest cycles. Here is a rough timetable.

9 Replies to “Yes, They Ate Locust – A Review of Some Common Foods at the Time of Jesus”