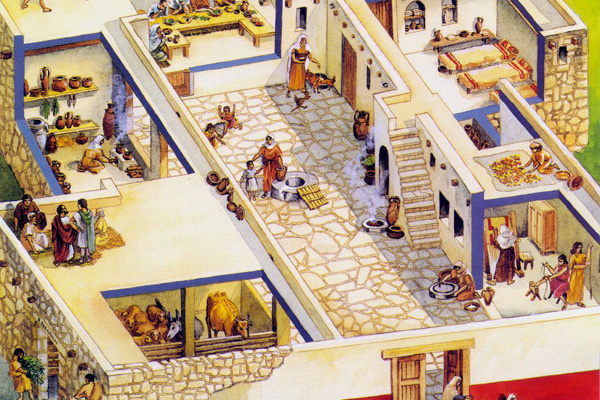 In Jesus’ time, the smallest homes of the very poor might be little more than a square, stone structure covered with a whitewashed sort of stucco. There would typically be one larger multipurpose room and a smaller back room for the animals. Some houses in hilly regions were partial cave dwellings, built up against the limestone rock face, perhaps with the front section built onto it. The traditional site at the house of the Annunciation in Nazareth seems to have employed this strategy. However we need not conclude from this that Joseph and Mary were destitute. Many homes employed the “hillside strategy” that made use of hollowed out caves. Such structures were easy to build and there was a certain natural coolness to them.

Another sort of house, also common among the working poor and typical village-dwellers, was one built around a central open court with small rooms opening onto it. (See the drawing at the upper right; click the picture for a larger view). This kind of building had the advantage of needing only short beams for the roof structures, since the central court had no roof. The open concept retained the coolness by allowing air to move freely through. Cooking could also be done in the open central court, when the weather permitted.

If the family had some animals, they were often kept in part of the house at night.

The roof was of real importance in everyday life. It was a flat roof with just enough slope to drain off the rainwater. Rainwater was carefully collected into cisterns or large containers, for in the more arid climate of the eastern Mediterranean every drop of water was precious. The roof of the house was flat and sturdy, enabling people to venture up on it. Since the roofs were used so often, the law of Deuteronomy required guard rails to be installed to prevent falling.

The roof areas in effect provided an open second floor. On the roof, tools would often be stored, laundry would be put out to dry, and people would often gather to talk, especially in the evening. Scripture also speaks of it as a place to retire and pray. In the evening when it was cool, people sat and talked, and in the better weather would often sleep there. The climate of the Mediterranean provides a rather perfect setting for this at most times of the year. Some also placed tents and other coverings on the roof.

Except for the roof structures, which included wood timbers, the basic building material in Palestine was stone. The limestone provides excellent building material and as the stones were fashioned into a wall, they would be coated with a flat, fixed stucco-like material and smoothed over. Foundations were dug with great care as Jesus also said to build upon rock rather than sand. The mortar was used to bond the stone that was made of clay mixed with shells and potsherds.

As for the structure of the roofs, wooden trusses were necessary, since the roof would be used as a kind of second floor. Then a kind of wattling or firm lattice of straw mats would be covered over and smoothed with hard clay. Yearly repairs were made just prior to the rainy season. Most of the inner doors were narrow; only the door facing the street was wider and had a hinged door that could be secured.

In poorer homes the floor was simply pounded earth. The more affluent might have pebbles or baked clay tiles. Wooden floors could be afforded only by the very wealthy.

Only the very wealthy could afford to have water piped to their houses. Ordinary people went to the well or spring-fount, or perhaps a local stream, and collected water with skins, jars, and all kinds of pitchers. Some larger towns did have conduits or aqueducts that brought the water to certain public areas. The washing of clothes was done away from the main house lest water run back in.

Generally there was no need for a lot of heating, except in the cooler months of the year. Most of the houses therefore had no fireplaces. If it did grow cold, there were charcoal braziers where small fires would be kindled.

Lighting was not very abundant. Small oil lamps were used. It will be recalled from above that much time was spent out-of-doors so interior lights were less necessary.

Furniture was extremely simple. The chief object in the home was the chest. There were chests for provisions and chests for clothes. For the poorest families, chests doubled as tables. Since clothing was simple, there was little need for many different sets or changes of clothing, and thus there was less need for numerous chests and the sorts of insanely large closets many have today.

Most moderately well off families did have a low table at which to recline and eat. People in this region and time reclined on their left elbow and ate with their right hand. Sitting on chairs at higher tables to eat was rare.

The kitchen as we know it did not exist. In small houses cooking was done out back on an open fire or in a fire pit. Utensils were kept in a chest. In larger houses the courtyard might be the place of the cooking fire and kitchen items were kept in a storeroom.  Only the largest homes had a dedicated area with a fiery oven.

Bedding was rolled out on the floor; the bed as a piece of furniture off the floor, as in our homes today, was largely unknown at that time except among the very wealthy. Family members stretched out on mats, covering themselves with their own cloaks. Many slept on the roof in the warmer months.

Many even smaller houses seem to have had a bath of some sort. The ancient Jews were conscientious about cleanliness and saw it as related to holiness and ritual purity. The usual bath (often called a mikveh) was narrow and one stepped down into it. Bathing was for hygiene to be sure, but there were also ritual baths that the Jews took. In the Holy House in Nazareth, a mikveh is located in or near the house and adjacent to the carpenter shop of Joseph.

Latrines were more likely outhouses and were situated away from the main dwelling. They may have been shared facilities between several domiciles, depending on the size and layout of the town or village. There is an excerpt in the Torah in which Moses instructs the ancient Israelites to “build your latrines outside the camp.” It further states, “When you go to the toilet, take a paddle or a shovel with you and use the toilet and then cover it up,” suggesting that some sort of lime was thrown in after the use. Other directions about latrines were that they should be located in discreet, private locations. Certain archeological digs have uncovered the presence of latrines that consisted of a pit dug into the ground and of an enclosed, roofed chamber; basically an outhouse.

It was a simpler time to be sure, but still with all the basic needs of a home.

25 Replies to “What were typical homes like in Jesus’time?”