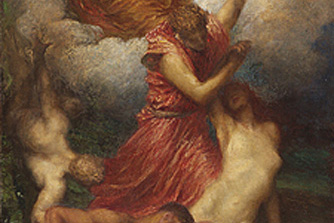 In yesterday’s blog post, I sought to explore the details Original Sin and to convey that there are subtleties and stages to the sin that have something to teach us. The sin was more than eating a piece of fruit, there were things that led up to it, both externally and internally, which the text reveals.

In yesterday’s post I also mentioned that it was worth exploring how the sacred text speaks of the Sin of Adam, and differentiates it to some extent from the sin that Eve commits. In fact, Original Sin, biblically, is properly denoted as the sin of Adam. It is Adam’ Sin not Eve’s that we denote as Original Sin (cf Rom 5:12 inter al).

It is not that Eve did not sin, or that her actions have no interest for us. Yesterday’s post focused a lot on the stages she goes through. But Rather, as the head of his household, and the human family it is Adam who bore the responsibility, and thereby incurs the sin that we call “Original Sin” or the “Sin of Adam” which comes down to all of us.

As you might be able to see, this blog post isn’t going to be very politically correct, and it is just going to get worse from here. For, in striving to differentiate Eve’s sin from Adam’s I would like to take up a very controversial text from St. Paul. While the specific text comports poorly with modern notions, two cautions are in order for those of us who read the text:

First, we ought to remember that it is a sacred text, and even if St. Paul may draw some of his reflections on the cultural experience of the time, he gives theological reason for what he rights, not just the practices of the time.

Secondly however we also remember that one verse from St. Paul is not all of St. Paul, and certainly not all of Scripture. What Paul says rather absolutely in the verse that follows, he qualifies to some extent and other places as we shall see.

With this in mind, let’s examine the controversial text and strive to see the distinctiveness of Adam’s sin from Eve’s. St. Paul writes:

A woman should learn in quietness and full submission. I do not permit a woman to teach or to assume authority over a man; she must be quiet. For Adam was formed first, then Eve. And Adam was not the one deceived; it was the woman who was deceived and became a sinner (1 Tim 2:11b-14)

Many, upon reading the text like this, so astonishingly out of step with modern thinking, are prone simply dismiss it as a disciplinary relic of some past dark age. It is debatable whether the edict that women should be silent, and have no teaching authority over a man are in fact mere disciplinary norms that we are not required to observe today. It is also debatable how absolute Paul’s words are. For Paul speaks elsewhere the women as catechists (e.g. Phoebe Rom 16:1) spiritual leaders and benefactors (eg. Lydia) in the early church communities. Elsewhere too he makes provisions for when a woman is to speak in the assembly and that if she does she is to cover her head (1 Cor 11:5) etc. So what St. Paul says here he distinguishes elsewhere in a way that allows for some provision that women both speak and teach the faith as Catechists etc.

In the quote from first Timothy above, the context seems rather clearly to be that of the family and marriage, wherein Paul affirms the headship of the husband, as he does elsewhere in Ephesians 5:22, Colossians 3:18, and also as does Peter (1 Peter 3:1-6)

There is another text where Paul speaks of women being silent in the Church. In 1 Corinthians 14. The context there seems to be liturgical, thus we read:

Women should remain silent in the churches. They are not allowed to speak, but must be in submission, as the law says. If they want to inquire about something, they should ask their own husbands at home; for it is disgraceful for a woman to speak in the church. (1 Cor 14:34-35)

Here again, there are legitimate debates about how strictly the silence is to be interpreted. Generally, Church practice has understood this to mean that women are not to give the official teaching in the liturgy that we refer to as the sermon or homily. And this stricture has been observed from antiquity down to the present day by reserving the homily to the bishop, priest or deacon. In more recent times there have been allowances for women to serve as  lectors, cantors, singers etc. But the official teaching moment of the homilies still reserved to the male clergy and the Magisterium still consists of Bishops and the Pope.

Prescinding from legitimate debates about how absolutely or strictly to interpret St. Paul’s restrictions, or whether or not some of these things are cultural artifacts that can be adjusted, what I really wish to focus on the theological reasoning regarding the difference between Adam and Eve’s sin of which St. Paul speaks. Again, he says

For Adam was formed first, then Eve. And Adam was not the one deceived; it was the woman who was deceived and became a sinner (1 Tim 2:13-14)

So, St Paul begins by saying that Adam was formed first, then Eve. And thus here he teaches that the husband has headship, authority, as he says elsewhere, The husband is head of his wife just as Christ is head of the the Church (Eph 5:22).

But in terms of Original Sin, which concerns us more here, Paul says that Adam was not the one deceived, it was the Eve who was deceived. Thus St. Paul speaks of Eve’s sin as different than Adam’s. She was deceived and so sinned, But Adam was not not deceived.  His sin lay elsewhere.

Of the fact of her deception, Eve or self as a witness, for she says, “The serpent tricked me and so I ate it.” (Gen 3:13) But of Adam’s sin, God says “Because you listened to your wife and ate fruit from the tree about which I commanded you, ‘You must not eat from it…” (Gen 3:17).  Thus, Adam’s sin lay in his willingness to allow his wife to tempt him.

Now course, dear reader, you were warned that this was not going to be a politically correct blog post. These sorts of teachings grate on modern ears. But of course this does not make them untrue.

Perhaps a little additional reflection may help to avoid knee-jerk reactions to either gloat or become angry. Adam and Eve’s sins are described differently and can also be understood as a kind of weakness that each of them was particularly susceptible to: she to deception, he to being swayed by Eve’s feminine mystique and beauty.

St. Paul does not simply locate these two weaknesses in Adam and Eve as individuals, but also as male and female. Hence St. Paul seems to teach that a woman ought not have a solemn teaching authority in the Church because of a woman’s tendency to be deceived.

Why might this be, that a woman could be more easily deceived? Perhaps it is rooted paradoxically in a woman’s strength. Among the strenghts that women more generally manifest is to be more naturally spiritual, and also to be more naturally prone to be a source of unity and peace in the heart of the family. And while these are wonderful strengths, they can, in certain circumstances, also open the person to deception. For if one seeks to easily to make peace, they may compromise with error and sin. And though being open to spiritual things is of itself good, there can be spiritual concepts that are erroneous, and to these one ought not be open.

Not only is a woman possibly more prone to these, but should she cede to them, she can also have undue power over her husband and men who may well be drawn by her beauty to set aside their better judgment.

And this is, to my mind what St. Paul is getting at here in saying even was deceived and Adam was not, therefore a woman cannot have teaching authority in the Church. There was also a warning in ancient Israel that men should not take foreign wives since they might confuse a man’s heart into the worship of their foreign gods. A man’s heart can easily be swayed by a beautiful and influential woman.

And thus, addressing a double threat, St. Paul forbids women to have teaching authority in the Church and ties it back to the archetypal incident of Adam and Eve. Eve was deceived, and then was able to turn and seduce her husband to sin.

In modern times it may well be that St. Paul’s caution is affirmed by the modern problem of Liberal Protestant denomination that have a large number of women leaders. It is these very denominations which have moved in this direction who also have departed significantly from the orthodox Christian faith, deny basic tenets of the Trinity, of moral teaching and biblical interpretation. It is not only women, but there is a high correlation between denominations that embraced women leaders and a departure from orthodox Christian belief.

Have I been politically incorrect enough for you? The combox is open. But recall that the chief focus I am interested here is on the different descriptions of the Sin of Adam and the Eve’s sin.

74 Replies to “How Is Adam’s sin Described Differently than Eve’s?”