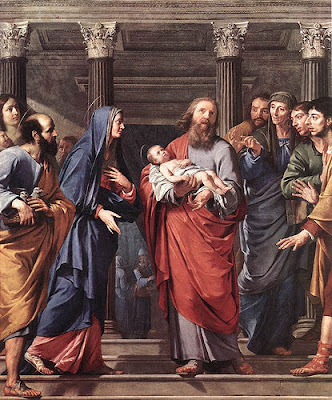 The Feast Yesterday of the Presentation of Jesus was a rich fare. In my homily I did not have time to cover all I wanted to. Frankly, the moment of the Presentation was one of the most dramatic in Biblical history, and yet almost no one noticed. Lets consider this astonishing moment.

The first part of this post is review for those of you who read regularly. To skip to the newer insights goo down to the red line.

Joseph and Mary have ascended to Jerusalem to fulfill two ancient mandates: the Rite of Purification for a woman after childbirth and the Rite of Presentation of their firstborn male child, Jesus. These rites set the stage for a dramatic moment in Biblical history, a moment missed by almost everyone. We shall explore this dramatic moment shortly but first a little background.

Jewish law considered that, after a woman gave birth she became ritually impure for a period. While this seems unjust to us, the Jewish notion was rooted in the flow of blood that occurred in childbirth and just about anyone who came in contact with blood incurred a ritual uncleanness for a period of time. The Book of Leviticus has this to say regarding a woman who has given birth:

The LORD said to Moses, “Say to the Israelites: ‘A woman who becomes pregnant and gives birth to a son will be ceremonially unclean for seven days, just as she is unclean during her monthly period. On the eighth day the boy is to be circumcised. Then the woman must wait thirty-three days to be purified from her bleeding. She must not touch anything sacred or go to the sanctuary until the days of her purification are over. If she gives birth to a daughter, for two weeks the woman will be unclean, as during her period. Then she must wait sixty-six days to be purified from her bleeding. ” ‘When the days of her purification for a son or daughter are over, she is to bring to the priest at the entrance to the Tent of Meeting a year-old lamb for a burnt offering and a young pigeon or a dove for a sin offering. He shall offer them before the LORD to make atonement for her, and then she will be ceremonially clean from her flow of blood.” ‘These are the regulations for the woman who gives birth to a boy or a girl. If she cannot afford a lamb, she is to bring two doves or two young pigeons, one for a burnt offering and the other for a sin offering. In this way the priest will make atonement for her, and she will be clean.’ ” (Lev 12:1-8).

As you can see, there is a fairly negative concept at work here from a modern viewpoint. A woman becomes ritually unclean by giving birth. This was due not to birth per se but to the flow of blood and/or other fluids at birth. Even more distressing to modern notions is that a woman who gave birth to a daughter was considered ritually unclean for even longer! Alas, it is well that the power of the Church to bind and loose has freed us from this thinking. Keep in mind that this was ceremonial law, not moral law and, hence, the Church is not setting aside immutable moral law in abrogating such notions of ritual impurity.

Obedient to the Law – Nevertheless Joseph and Mary, obedient to law make the dramatic ascent to the Temple, the Son of God carried in Mary’s arms. It is forty days since the birth of the Lord in fulfillment of the Law.

As they ascend the glorious steps to the Temple Mount they also fulfil another requirement of the Law:

You are to give over to the LORD the first offspring of every womb. All the firstborn males of your livestock belong to the LORD. Redeem with a lamb every firstborn donkey, but if you do not redeem it, break its neck. Redeem every firstborn among your sons. “In days to come, when your son asks you, ‘What does this mean?’ say to him, ‘With a mighty hand the LORD brought us out of Egypt, out of the land of slavery. When Pharaoh stubbornly refused to let us go, the LORD killed the firstborn of both people and animals in Egypt. This is why I sacrifice to the LORD the first male offspring of every womb and redeem each of my firstborn sons.’ (Ex 13:12-15)

But something even more dramatic takes place here. To understand what it is, let’s look back to 587 BC.

The Babylonians had invaded Jerusalem and the unthinkable had happened. The Holy City was destroyed and, along with it, the Temple of God. Inside the Temple something even more precious than the building had been housed: the Ark of the Covenant.

Recall what the Ark of Covenant was in the Old Testament. It was a box of Acacia wood, covered in gold. Inside it were placed: the two tablets on which God inscribed the Ten Commandments. Also in it was the staff of Aaron, and a vial of the Manna. More importantly, in this box, this ark, dwelt the very Presence of God in Israel. God mysteriously dwelt within, much as is the case today in our understanding of the tabernacle in our Catholic Churches.

The Lost Ark – Incredibly however, the Ark was lost when the Babylonians destroyed the temple and Jerusalem in 587 BC. It was never found again. Some thought Jeremiah had hid it in the Mountains, others that the priests had hastily hid it in the maze of caves beneath the Temple Mount. Others argue it was taken to Ethiopia. But in the end, the Ark had gone missing.

The ascent to Jerusalem is a steep one. The mountains surround Jerusalem and the City sits up at a higher altitude than the area around it. As the ancient Jews made the climb they sang the psalms of ascent: Psalms 120-134. As Joseph and Mary ascended they too sang the words that instilled joy: I Lift up mine eye to the mountains from whence cometh my help (121)…..I rejoiced when they said to me let us go up to the House of the Lord (122)…..To you O Lord I have lifted my eyes (123)….Like Mount Zion are those who trust in the Lord (125)….Out of the depths I call unto you O Lord! (130)…..Let us enter God’s dwelling, let us worship at the Lord’s footstool. Arise O Lord and enter your dwelling place, You and the Ark of your strength! (132)….Come and bless the Lord, You who stand in the House of the Lord Lift your hands to the Sanctuary and bless the Lord. The Lord bless you from Zion (134).

Singing these songs, Mary carried Jesus. The climb was even more difficult carrying a newborn babe. But the burden was sweet. A final ascent up the stairs to the Temple Mount. Likely they entered on the southern side through the Huldah gates. Going up the steep stairs, through the tunnel in the walls and emerging on to the bright Temple platform above.

God had returned to His Temple. He, and the Ark who carried him, were found. Mary the Ark, carrying Jesus in her arms. Jesus, very God, true God from True God. Yes, God and the Ark had been found and God was once again present among His people on the Temple Mount. Scripture says:

What a dramatic moment. And yet what a remarkable understatement by God! If I were to direct the moment I would have called for trumpet blasts, peals of thunder and multitudes of angels! And everyone would fall to their knees in recognition of the great fulfillment and the great return of God to his Temple.

Yet, it would seem only an elderly Man and woman took any note at all: Simeon and Anna. They alone understood they were in the presence of greatness and beheld the drama of the moment:

Now there was a man in Jerusalem called Simeon, who was righteous and devout. He was waiting for the consolation of Israel, and the Holy Spirit was upon him. It had been revealed to him by the Holy Spirit that he would not die before he had seen the Lord’s Christ. Moved by the Spirit, he went into the temple courts. When the parents brought in the child Jesus to do for him what the custom of the Law required, Simeon took him in his arms and praised God, saying: “Sovereign Lord, as you have promised, you now dismiss your servant in peace. For my eyes have seen your salvation, which you have prepared in the sight of all people, a light for revelation to the Gentiles and for glory to your people Israel.” The child’s father and mother marveled at what was said about him. Then Simeon blessed them and said to Mary, his mother: “This child is destined to cause the falling and rising of many in Israel, and to be a sign that will be spoken against, so that the thoughts of many hearts will be revealed. And a sword will pierce your own soul too.” There was also a prophetess, Anna…Coming up to them at that very moment, she gave thanks to God and spoke about the child to all who were looking forward to the redemption of Jerusalem. (Luke 2)

Yes, here was the dramatic moment awaited for centuries. The ark of God was found (Mary), and God (Jesus) returned to his temple. But only a few noticed. Just a few understood and celebrated.

And what of us? At every Mass Jesus, God himself is present. Yet how many notice? Do they really see him? Or do they see only the human priest and the human elements of the Mass. Do you see? Do you notice? Are you Simeon? Anna? Mary? Joseph? Or are you just among those on the Temple Mount who miss the dramatic moment of God with us?