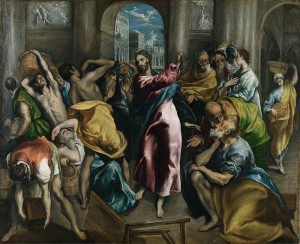 There is an unfortunate tendency in our times to confuse or equate kindness with charity. There is the tendency to prioritize never offending or upsetting others, over proclaiming the truth. And while it is true that kindness and not intentionally hurting other’s feelings or causing offense is a  good thing, it is not so good that the truth should be suppressed in order to accomplish it.

But, it is a sadly common today. Consider a priest, who, in order not to give offense or cause others to be upset, does not preach important aspects of the Gospel or the moral law. Consider the strange modern phenomenon of parents who want to be their children’s a friend and almost seem to feel fear of their children’s anger,  so they do not discipline, they do not correct. Consider a family gathering when one or  more of the members around the table are involved in serious and unrepentant sin, yet in order to “keep the peace,” instructions are given not to mention such unpleasant things, or to do or say something about it since it might upset someone.

Yes, many people mistakenly equate charity with kindness and refuse to insist on accountability, to warn of sin, or to distinguish error from truth. Yet these things are a necessary part of true charity. In so doing, some feelings maybe hurt.  And while upsetting people is not directly intended, it is sometimes a necessary component of fraternal correction.

Without such necessary correction, one’s feelings may be spared, but ones soul may in fact be lost!

Consider a medical analogy. What if a patient went to the doctor, who, observing the test results could see that the patient had a very serious cancer that needed immediate attention. But what if that Doctor were to say to himself, “I don’t want to upset the patient. I don’t want to cause him grief.”  And so the doctor either says nothing, or even lies and says “You’re fine go home, rest assured.”  We would say that this doctor is guilty of malpractice.  The charitable thing to do is speak the truth to this person, along with reassurance and proposed solutions,  or at least ways to ameliorate the problem.

And yet when it comes to spiritual or moral truth, it is precisely malpractice that many Christians exhibit.  We would not call the lying doctor charitable, or even kind.   He is simply guilty of malpractice.

So it is with God’s prophets who are called to speak the truth. We are guilty of malpractice if we don’t speak it in love. Priests who do not teach their congregations on critical moral issues or warn sinners are guilty of malpractice, they are not charitable, they are not even kind, though they may get credit for it. Neither are parents who do not discipline their children or insist upon the truth. Likewise for any Christian who walks through this hell-bound sin-soaked world and says little.

We may all get credit for being nice, and popular, but to suppress the truth is neither charitable nor is it kind.  Frankly, it is a form of cruelty.

It is true, that we ought to look for the best opportunities to speak to others, simply blurting out the truth without charity, might be ineffective.   And truth without charity really isn’t truth. We may also look for and ponder ways of speaking that will not cause undue grief or anger, we may understand that some issues are more important deal with first, before others etc.

But we cannot endlessly delay what must be done. To fail to speak the truth is not love, it is not charity, it is not kindness. It is really just self-serving and its ugliness is compounded by the fact that we so easily congratulate ourselves for being tolerant, kind and nice. But none of these notions should be confused with holiness or Charity. They are more about “me” and protecting and advancing “me” and steering clear of unpleasantries. Never mind that some people I am being “nice” and “kind” to may go to Hell for my silence.

Jesus, who is Love, who is charity, often said things that shocked and provoked. Indeed, he incited enough anger to get killed.

We need to be careful about expressing our anger (unlike Jesus). Two days ago there was a lot of unholy and unnecessary nastiness in the combo. This post reminds us to speak the truth, and not equate mere kindness with Charity. However, it is not a license to be nasty, harsh, personal and mean. Truth spoken without love really isn’t truth. For, instead of serving truth, it harms it and makes it seem odious.

But that said, we have diverged from the virtues and mistakenly equated kindness with true charity. Jesus was not “kind” by any modern standard. He was, like any prophet, plain spoken and did not hesitate to pierce to the root of every human heart

Evil triumphs when the good remain silent. Too easily are the words fulfilled which say, The best lack all conviction, while the worst  Are full of passionate intensity. (Yeats). Love and charity do not exempt us from speaking the truth.

21 Replies to “Malpractice?? A meditation on confusing kindness with charity”