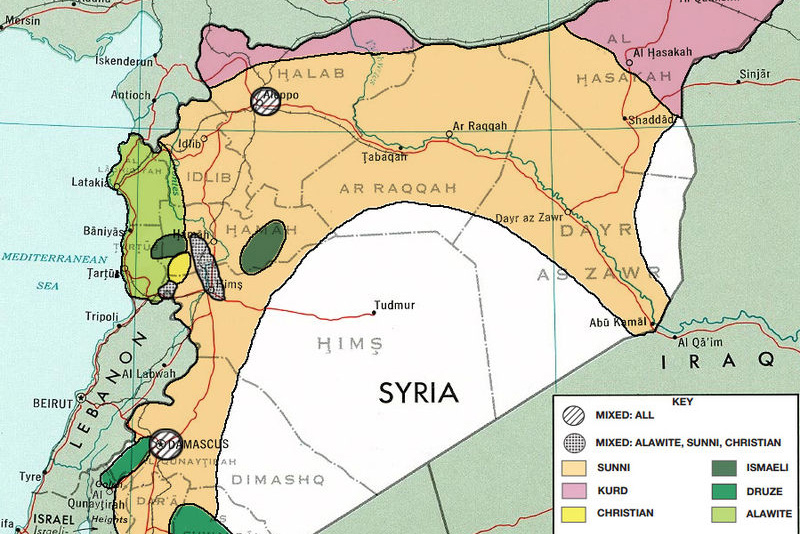 Given all the talk of Syria in the news lately, I was asked if Syria is the same “Assyria” that is mentioned in the Bible. The answer is no from a political perspective. The modern state of Syria was formed after World War I and became independent after World War II.

However, there are historical connections to ancient Assyria, including some similar territory. Given the recent news, perhaps we can take a brief look at ancient Assyria and the role it played in Biblical history. As with everything in Scripture, there are important teachings and admonitions for us.

Assyria was one of the Great Mesopotamian powers along with the Babylonians and the nearby Persians. The areas they occupied are roughly close to the borders of modern day Syria (Assyria), Iraq (Babylon) and Iran (Persia). Assyria in particular, was located to the east and Northeast of the Northern Kingdom of Israel stretching into Mesopotamia (the broad plain between the Tigris and Euphrates rivers). See map at upper right, click to enlarge.

Assyria as a nation began a rise to power in the 13th Century BC and contended with Egypt and Babylon for control of the area of Palestine. During this time, The Jewish people were in bondage in Egypt.

Assyria enjoyed a kind of “Golden age” from 12th – 10 Centuries BC. but became weakened through corruption and increasing hostilities with Babylon to its south. It was during this time that the Jews reentered Palestine and reached their own “Golden Age” under King David. Even after David, Omri the King of Israel had conquered part of Assyria and the Land of Aram near modern day Damascus and Made an alliance with the Phoenicians to the North (modern day Lebanon). This was the height of the North Kingdom’s (Israel) power, and the Assyrian armies were largely held in check.

But, beginning in the 9th Century BC Assyria began a reform that led to it arising once more as a formidable power. During that same period, (9th – 8th Centuries BC), The Jews were in a decline as the Northern Kingdom of Israel and the Southern Kingdom of Judah had divided and were engaged in increasing conflict and even outright war with one another.

Assyria grew stronger, and by the early 8th Century and began to dominate the nations of the Ancient Near East, with Israel still being its most formidable foe.

Among the newer weapons the Assyrians employed were the battering ram, along with ladders to scale ancient walls. The Assyrians were also great charioteers, having some 2,ooo chariots, most of them large enough to carry two or three men with weapons. Assyria also had a reputation for great bowmen, slingers and even some cavalry.

Israel by comparison at the time had only 10 chariots and tended to win more through superior tactics than by lots of equipment.

By the late 8th Century (c.a. 725 BC) Assyrian had reconquered Babylon and was dominating Israel, demanding tribute. The Prophets had been warning Israel that due to her sins, she was growing weaker and her enemies were growing stronger. God sent Elijah and Elisha, Amos and Hosea. Each in their own way warned that power had corrupted the northern Kingdom of Israel.

Elijah and Elisha warned of the extreme spiritual danger posed by the false worship of the Baals by many in Israel and the toleration of this by many more. Hosea depicted Israel as a false Bride who in her infidelity had become an adulterer and prostitute. He poured out God’s heart and reminded Israel of its first Love and that God’s was calling her back. Amos minced no words and denounced Israel for her injustice to the poor, violence and of even being willing to sacrifice her children to false gods!

Yet there was a consistent refusal to heed the call to repent. This period is the background for the story of the Prophet Jonah who was sent by God to Nineveh, the Capitol of Assyria to preach repentance. Jonah knew that if they repented they would grow stronger, so he fled and refused the mission. God pursued him, and after the storm at sea and a whale of a ride, Jonah did go, and the Assyrians of Nineveh did repent, and thereby grew stronger.

The final showdown with Israel came in 721 B.C. during the reign of King Hoshea who foolishly and against prophetic instruction made a pact with Egypt and refused to pay tribute to Assyria. Shalmanesar,  King of Assyria attacked the Northern Kingdom of Israel utterly destroying it (cf 2 Kings 17). Those who survived disappeared into exile (the so-called “10 Lost Tribes” of Israel).  The few who remained intermarried with the Assyrians and became the Samaritan people.

An attempt to destroy the Southern Kingdom of Judah was miraculously turned back at the gates of Jerusalem when a likely case of dysentery afflicted the Assyrian army. Further conflicts in the decades ahead with Egypt and Babylon eclipsed Assyrian power once again. By the close of the 7th Century Assyria was little more than a loose confederation of Scythian Tribes.

The Modern State of Syria, though occupying Land similar to ancient Assyria, is not equivalent to or even a direct descendent of ancient Assyria. Syria was established after the first World War and was governed by the French who replaced the Ottomans. Syria gained independence in April 1946, as a parliamentary republic. But the  post-independence period has been stormy, with a large number of military coups especially in the years  1949–1971.

A final thought. Jesus warned the people of his own day, This is a wicked generation. It asks for a sign, but none will be given it except the sign of Jonah (Lk 11:29)  Jesus was harkening back to the historical paradox that when Israel would not repent, he frequently used the pagan nations around them to humble and purify them. Since Israel would not repent, God sent Jonah to strengthen the Assyrians and God eventually used Assyria to prune Israel, and execute justice for its failure to repent.

And thus for the people of Jesus time, if they would not repent, and come to believe, they, in their foolishness like Hoshea of old, would wage war, this time against the Romans, and suffer a horrible blow. That in fact happened in 70 AD when the Temple was destroyed and 1.2 million Jews died in the war.

It is a mysterious providence but it is also written to warn us. If we do not repent, we cannot be strong, and our enemies will surely overwhelm us. And what will our Assyria, our Rome be? It could be radical Islam, it could be our debt crisis, it could be our demographic winter. But by failing to repent, by our injustice, our refusal to keep commitments, our rising unbelief and ingratitude, by our sacrificing our children on the “altars” of our lust and our burning incense to the “gods” of this age, we are calling a just punishment and grave consequences that cannot forever wait.

47 Replies to “Is the Syria of Today the Assyria of the Bible?”