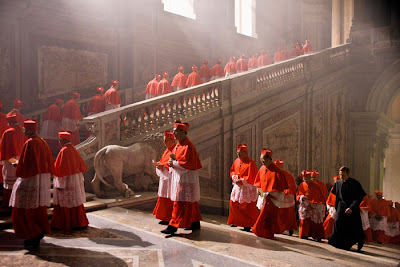 History [1]- Originally the term “cardinal” simply referred to any priest who was attached to a particular church or diocese. Even to this day we speak of diocesan priests as being “incardinated” (or attached) to a certain diocese, and this is required for every priest. There are not to be “free-ranging” priests. Later however, from about the 4th Century through the late Middle Ages the term “cardinal” came to be used only of certain more prominent priests in the larger and more prominent dioceses of antiquity such as Constantinople, Milan, Ravenna, Naples, Sens, Trier, Magdeburg, and Cologne and of course, Rome. In more recent centuries the term came only to be used of Rome.

And thus we find the term cardinal used in the Church at Rome (from at least fifth century) to designate priests permanently serving in the Roman parishes and ministries under the Bishop of Rome, the Pope— These were the “cardinal priests.” However, as the number of priests grew, not all the priests attached to these Roman parishes were known as cardinal, but only the first priest in each such parish—i.e. the Pastor or Rector.

Cardinal priests attended not only to their own ministry or parish but also convened regularly to oversee matters of Church discipline in the diocese of Rome. These might include matters of disciplining the clergy, filling vacancies and so forth. But it also involved matters pertaining to the laity insofar as they interacted with the Church. Thus the Cardinal priests assisted the Pope in the administration of the Diocese of Rome. There are some echoes of all this in every diocese through a mechanisms known as the College of Deans and College of Consultors who assist the Bishop in administrative details and matters of Church discipline.

Cardinal Deacons – During all this time just described there also existed a group known as the cardinal deacons. The Roman Diocese was divided into seven regions and a deacon was assigned to each. They performed numerous duties but chief among them was record-keeping and the coordination of the care of the poor, cemeteries and the like. Given their elevated status over a deacon who only served a parish, they came to be called cardinal deacons. These cardinal deacons would also assist the Pope liturgically whenever he was in that region of the diocese. The number of these cardinal deacons gradually rose over the years.

Cardinal Bishops – Yet again, during all this time there also emerged the cardinal bishops. As the worldwide Church grew in size, the duties of the Pope, and the administrative concerns of the Roman Church (diocese) grew. The Pope increasingly came to call on bishops of nearby dioceses (esp. Ostia and Velletri, Porto and Santa Rufina, Albano, Frascati (Tusculum), Palestrina (Præneste), and Sabina) to represent him in an official capacity and to give him counsel. In a way it was like the modern notion of a local synod.

Thus we see that the Cardinals had varying ranks and functions. They were, assistants of the pope in his liturgical functions, in the care of the poor, the administration of papal finances and possessions, and met in synod over the disposition of important matters to include Church discipline.

By the 11th Century the College of Cardinals took on more importance as they began to oversee the election of a new pope when this became necessary. They not only saw to the election but they also ran things during the interregnum. From this time on their functions and importance grew. The Pope met regularly with them in something called the “consistory,” i.e. the reunion of the cardinals and the pope. In these meetings were regularly treated doctrinal questions of faith, disciplinary matters, canonizations, approvals of rules of new orders, indulgences for the Universal Church, rules for papal elections, the calling of general councils, appointing of Apostolic legates and vicars etc. The consistory also oversaw matters concerning dioceses and bishops, creation, transfer, division, the nomination and confirmation of bishops, also their transfer, resignation, etc.

The Modern Scene – More could be said of the history but allow this to bring us to modern times [2].

Although we see historically that there are three ranks of Cardinals (bishop, priest and deacon) it is now the practice that only bishops are elevated to the College of Cardinals. Since 1962 all cardinals have been required to receive episcopal consecration unless they are granted an exemption from this obligation by the Pope. Most recently this happened with Cardinal Avery Dulles who was elevated to Cardinal but remained a priest.

Though all the Cardinals are now bishops, the traditional distinctions are maintained. The title of “Cardinal Bishop” only means that he holds the title of one of the “suburbicarian” (nearby dioceses of Rome listed above) or that he is the Dean of the College of Cardinals — or that he is a patriarch of an Eastern Catholic Church. Cardinal priests are the largest of the three orders of cardinals. Cardinal priests today are generally bishops of important dioceses throughout the world, though some hold offices in the Curia. The cardinal deacons are either officials of the Roman Curia or priests elevated after their eightieth birthday (such as Cardinal Dulles was).

As for the functions of the College of Cardinals, we have already seen much of this in the history above. In modern times the function of the college is to advise the Pope about Church issues whenever he summons them to an ordinary consistory. The cardinals not only attend the meetings of the College but also make themselves available individually or with small panels of cardinals if the Pope requests their counsel in this way . Most cardinals have additional duties, such as leading a diocese or archdiocese. Others run a department of the Roman Curia.

The College of Cardinals also convenes on the death or abdication of a pope as a papal conclave to elect a successor. The college has no ruling power except during the sede vacante (vacant see) period, and even then its powers are extremely limited.

Those who attain to this office have proven their worth as stable and wise counselors, good bishops of the Church. May our Cardinals experience many graces and blessings in their work of electing a new Pope, likely from among their own number.

4 Replies to “What is a Cardinal? The Role of the College of Cardinals in History and Today”