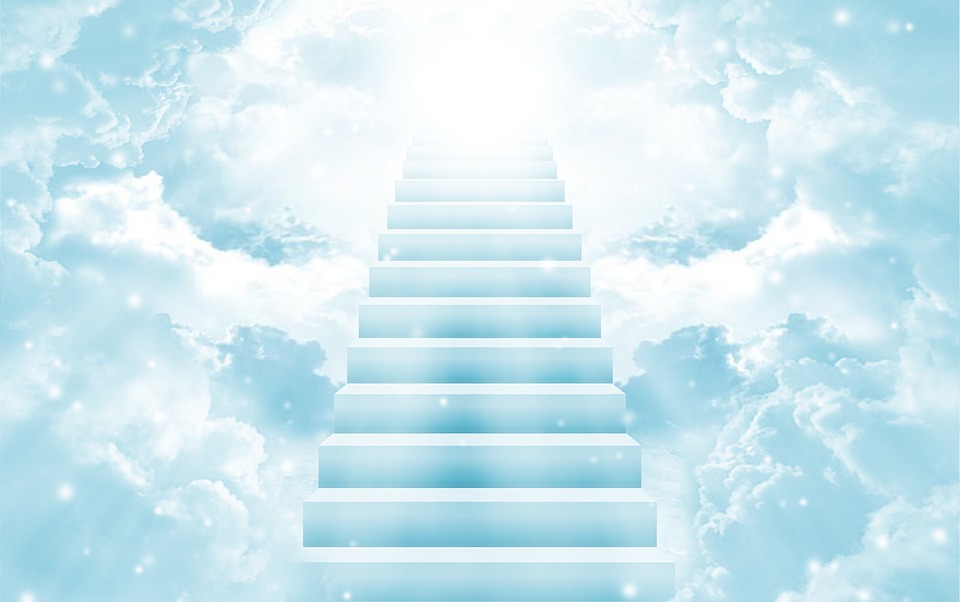 My brothers, Christ made love the stairway that would enable all Christians to climb to heaven. Hold fast to it, therefore, in all sincerity, give one another practical proof of it, and by your progress in it, make your ascent together…. He who walks in love can neither go astray nor be afraid: love guides him, protects him, and brings him to his journey’s end (St. Fulgentius of Ruspe, bishop, Sermo 3, 1-3, 5-6: CCL 91A, 905-909).

This is solid biblical advice, for God is love, and Heaven is union with God. Hence, we must walk in love and become God’s love to enjoy the perfect communion with God that is Heaven.

The 1971 Led Zeppelin song “Stairway to Heaven” is among the most popular rock songs of all time. When asked about the lyrics, the author, Robert Plant, said that he thought that their popularity stemmed from the fact that they are an “abstraction.” He added, “Depending on what day it is, I still interpret the song a different way — and I wrote the lyrics” [*].

Some of us back then wanted the almost mystical opening section of the song to have religious meaning. After all, it spoke of a stairway to heaven and of the “May queen.” If there really were a stairway to Heaven but a highway to hell, it would explain life well. However, there are many problems with the song’s lyrics. Its notion of that stairway to Heaven is ambiguous at best and antithetical to religious and biblical teaching at worst.

The lyrics of “Stairway to Heaven” are shown below in bold italics, while my commentary (much of it lighthearted) is presented in plain red text.

One can’t buy a stairway to Heaven with mere gold, and even if it were theoretically possible, we would never be able to accumulate enough. So maybe the lady should be less sure in her gold and more trusting in and dependent on God. Maybe she should concentrate on loving the light that makes her gold glitter rather than the glittering gold itself. There’s an old gospel song that says, “I’d rather have Jesus than silver and gold.”

No, actually, she can’t. Only Jesus opens the door, and He will be our judge. No one forces the heavenly gates open. Of Jesus, Scripture says, What he opens no one can shut, and what he shuts no one can open (Rev 3:7). The woman’s gold is no good in Heaven; all that matters is knowing the gatekeeper, Jesus.

There’s a sign on the wall
But she wants to be sure
’Cause you know sometimes words have two meanings
In a tree by the brook
There’s a songbird who sings
Sometimes all of our thoughts are misgiving.

To some degree we love ambiguity because it allows us to avoid making decisions and being obedient to what is taught. However, sometimes words are very clear in their meaning and we must decide either to accept and live by them or to reject them and suffer any consequences. This is especially the case with God’s revealed word. As for our thoughts, we love to rationalize and make excuses, but deep down we hear the voice of God echoing; we know what we are doing and whether it is right or wrong.

Well, don’t wonder forever. Sooner, rather than later, we have to make some decisions. Do you want what God is offering or not? Do you want to be holy or not?

And it’s whispered that soon,
If we all call the tune
Then the piper will lead us to reason
And a new day will dawn
For those who stand long
And the forests will echo with laughter.

Yikes! Don’t ever think that if we call the tune we will be led to utopia. No, no, no! Let God call the dance; let Him set the tune and the path. Utopianism led to the horrifying killing fields of the 20th century. The forests are certainly not echoing with laughter; if anything, they are being consumed by the lustful blazes of a world insistent upon marching to its own tune rather than God’s.

Well, I suppose that alarming movements in our life can alert us to trouble and summon us to positive change. Let’s let this verse stand, but the May queen referred to here can’t be Mary because she doesn’t need spring cleaning.

Yes, there are two paths you can go by
But in the long run
There’s still time to change the road you’re on

It is true that there are just two paths; there is no third way given! Conversion is still possible if you’re on the wrong path. But be sure to switch paths only if you’re not walking with Jesus.

Danger, Will Robinson! We learned that the piper is a symbol for the world. Do not follow this piper. Ignore his tunes!

Ah, here is Mary! See, I told you this is a religious song!

How everything still turns to gold

Oops, where did that come from? I guess this isn’t Mary—unless she’s into the prosperity gospel.

Now there’s that crazy piper again with his worldly tune, still trying to mesmerize me and give me an earworm of earthly tunes!

No, sorry, only God can be all in all. We might all be one, but even together we could never be all. It’s great to be a steady rock, but that is only accomplished by building our house on the solid rock of Christ’s teachings.

And she’s buying the stairway to heaven

No, she isn’t. She can’t afford it—but she can ask Jesus!

Well, I guess we’re just going to have to accept that “Stairway to Heaven” isn’t the religious song we’d like it to be. Whatever “Heaven” is alluded to, it isn’t our heaven.

It’s better to listen to St. Fulgentius of Ruspe, who reminds us that the true stairway to Heaven is the way of love—and not mere human love, but divine love infused in the soul. It is God’s love that animates our actions and lifts us higher as we accept its movements in our heart. This love cannot be bought; it is offered freely.

It does “cost” us, however, as our favorite sins fall away, and our priorities and passions change for the better. As the fruit of love, these changes are accepted not because we must but because we want to.