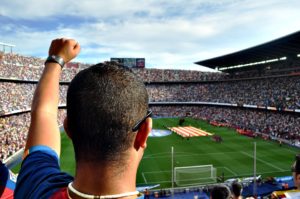 Among the losses in our declining culture is that of “common” or shared spaces and events. In these situations, Americans could come together and enjoy some degree of unity and common purpose. Usually they involved diversions like sports, movies, or other entertaining and uniting activities. Whatever political, religious, or cultural differences, Americans could set aside their differences and enjoy something together.

These were times when people left their politics behind and enjoyed things common to everyone. Here in Washington, D.C., political divisions could run deep, but come Sunday the stadium was filled with united Redskin’s fans, especially when we played Dallas. Even if some rooted for “the other team,” it was all in good fun. Fans of things like Star Wars and Star Trek might be in different political parties, but they could enjoy talking about their favorite characters and episodes. On July 4th, it was great to be an American regardless of which political party we favored; there were parades, fireworks, and the reading of the Declaration of Independence. We could visit the Disney of more innocent times and watch the Main Street Electrical Parade, shoulder-to-shoulder with people of all shape, sizes, colors, and beliefs.

These and others were common or shared spaces where we could all have a good time and forget our troubles and divisions, even if only briefly.

Such spaces and occasions are disappearing, one by one. Everything these days is being politicized. In the football world, the latest kerfuffle over our National Anthem (another thing that used to unite us) is only the latest in a series of attempts by players, owners, and sports networks to inject politics into the game. Football players and coaches are lecturing to us; sports anchors opine, the PC crowd pores over Super Bowl commercials looking for any sign of offense, the Super Bowl halftime shows reek of the sexual revolution. Blech!

Actors, actresses, and singers wag their fingers at us, issuing political speeches and injecting social commentary at the Grammys, Oscars, and Emmys. Do we really care what some celebrity’s political stance is? Do we need to hear how much they like the sexual revolution? Must they weigh in on the latest cause célèbre? Even the opening monologue is some sort of tirade against someone or an opinionated lecture delivered in the bubble of a like-minded crowd who seem to have little understanding of how condescending it all sounds. Gone are the days of good old-fashioned movies that entertained and/or elevated us. Everything has to have a message—usually an attack on traditional values or a foray into our political divisions. This was the very thing we once turned to entertainment to escape.

Victor Borge once said, “Laughter is the shortest distance between two people.” But today even comedy has been infected with politics and the hypersensitivity of political correctness. What makes things funny is how they often stereotypically capture a truth. Yes, it is exaggerated. Yes, it pokes a little fun. Yes, it plays to expectations, though sometimes with a surprising twist. Today we’re not “allowed” to laugh at much of anything. We’ve become so thin-skinned that we’ve lost the ability to laugh at ourselves. Comedy has also become rife with sexual banter that makes it R-rated, and one-sided attacks that reflect its politicization.

Columnist Ben Shapiro has this to say:

America needs to take a breath from politics every so often. Football is one of those breaths.

Hollywood and pop culture would do well to remind themselves that if they don’t want to alienate half their audience and exacerbate our differences, they can allow us room to breathe. The Super Bowl [once] did that … So much for that rosy notion. The NFL has become ground zero for the culture wars. Which means that we can’t see movies anymore, watch TV shows anymore, or even watch sports anymore without feeling that we’re being judged. That means our common spaces are disappearing. And we have so little political common space already that cultural common space was our last relic of togetherness.

Here’s the bottom line: this conflict isn’t good for the country. We need our shared symbols, and we need our shared spaces. Both of those elements are being destroyed for political and ratings gain. If that doesn’t stop, we’re not going to have anything at all in common anymore [Ben Shapiro, writing in “The Daily Wire”].

While this issue is not a Christian one per se — it is a wider cultural one — Pope Benedict XVI diagnosed its deeper roots when he spoke of the “tyranny of relativism.” Relativism is a form of subjectivism which shifts the locus of truth and reality from the object to the subject. Because subjects (people) differ in their perceptions, the truth is then claimed to be relative. This leads to tyranny, however, because when we can no longer point to reality and reason to make our point, we are left with shouting and pressuring. Who wins when reason and reality itself are jettisoned? Those with the most money, power, and influence; those who are loudest; those who are fiercest; those who are willing to go to extremes to force their opinion. When reason and God’s reality are thrust aside, the loud, the powerful, the arrogant, and the extreme get their way.

Amusement parks, movies, parades, and even the gridiron cannot withstand the politicization; it is forcing its way onto the field and into everything. Common spaces are fewer than ever; everything today is a bitter dispute. Blech!

Here’s a video from another world, long ago.