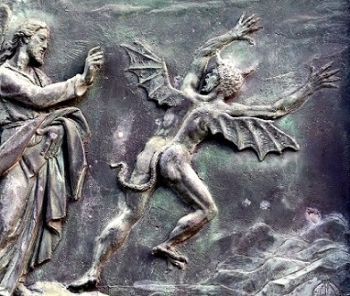 The video at the bottom of this post is of Archbishop Fulton J. Sheen. It is a fascinating excerpt from a longer presentation he did. In it, he analyzes the diabolic (anything of or relating to the Devil) from several different perspectives. Archbishop Sheen identifies three characteristics of the diabolic by examining the story of the Gerasene demoniac, which is presented in the synoptic Gospels. Here is the beginning of the story as it appears in the Gospel of Luke:

They sailed to the region of the Gerasenes, which is across the lake from Galilee. When Jesus stepped ashore, he was met by a demon-possessed man from the town. For a long time, this man had not worn clothes or lived in a house, but had lived in the tombs. When he saw Jesus, he cried out and fell at his feet, shouting at the top of his voice, “What do you want with me, Jesus, Son of the Most High God? I beg you, don’t torture me!” For Jesus had commanded the evil spirit to come out of the man. Many times it had seized him, and though he was chained hand and foot and kept under guard, he had broken his chains and had been driven by the demon into solitary places. Jesus asked him, “What is your name?” “Legion,” he replied, because many demons had gone into him (Luke 8:26-30).

Following this, Jesus drove the demon(s) out the man and into the herd of swine.

From this story, and also based on an insight from Dr. Rollo May, a psychologist of his time (the talk was given in the mid-1970s), Archbishop Sheen sets forth these three characteristics of the diabolic:

It does not take much effort to recognize that these three characteristics of the diabolic are alive and flourishing in the modern world, at least in the West. Let’s examine the evidence we can see all around us today:

1. Love of Nudity – This is obvious in the modern world on several levels. First, there is the widespread tendency toward immodest dress. We have discussed modesty here before on this blog, noting that the words “modesty” and “moderation” come from the word “mode,” which refers to the most commonly occurring value in a set of data. Hence, while we want to avoid oppressively puritanical notions about dress that impose heavy burdens (especially on women) and regard the body as somewhat evil, we must also critique many modern forms of dress that are at the other extreme. These “fashions” reveal more than is reasonable and are generally intended to draw attention to aspects of the body that are private and reserved for sexual union within marriage. Too many in our culture see no problem with parading about in various stages of undress, wearing clothing that seems intended to call attention to, rather than conceal, the private areas of the body. This love of disclosure and titillation is surely an aspect of the Evil One’s love of nudity.

Pornography, though nothing new in this fallen world, has surely reached epidemic proportions thanks to the Internet. Any psychotherapist, counselor, or priest will tell you that addiction to pornography is a huge problem today. Millions of Americans are viewing enormous amounts of pornography and the “industry” appears to be growing rapidly. What once required a visit to a hidden-away adult bookstore is now available in one’s home with just a click of the mouse. And the thought that browsing habits are easily discoverable matters little to the addicts of this latest form of slavery. Many are on a steep slope downward into ever-more-deviant forms of pornography. Some end up at illegal sites and before know what’s happened, the FBI is knocking on their door. Yes, Satan’s love of nudity has possessed many!

The overall sexualization of our culture also ties in to Satan’s love of nudity. We sexualize women in order to sell products. We even sexualize children. Our sitcoms feature endless immature chatter about sex. Collectively, we act like oversexed teenagers obsessed with something we don’t really understand. Yes, Satan loves nudity and everything that goes with it.

Then of course there is the utter confusion that celebrates homosexual activity. What Scripture calls gravely sinful, disordered, and contrary to nature (παρὰ φύσιν – para physin – Rom 1:26), is openly celebrated by many in our culture. Those afflicted with such desires openly and proudly identify themselves with what tempts them. Rather than lamenting the trials faced by those with such an affliction, and offering love, support, and the truth that they should live celibately (as all the unmarried are called to do), our sex-saturated culture, blinded and darkened by its own wild lust, affirms and even encourages them to indulge in what can only bring further harm to them and others. They have exchanged the truth of God for a lie … (Rom 1:25). It is no surprise that as a result of this celebration of darkness and confusion, the even more deeply confused notion of “transgenderism” has taken root.

Thus, the love of the nudity and the related obsession with (and confusion about) sex is manifest in our culture. It is surely a sign of the diabolic.

2. Violence – Collectively, have turned violence into a form of entertainment. Adventure movies and video games turn violent retribution into fun and death into a “solution.” Recent popes have warned us of the culture of death, a culture in which death is put forward as the solution to problems. Violence begins in the womb as the innocent are attacked as we defend “choice” and “rights.” The embrace of death continues to pervade the culture through contraception, gang activity, frequent recourse to war, and capital punishment. The past century was perhaps the bloodiest ever known on this planet: two world wars, hundreds of regional wars and conflicts, starvation campaigns, and genocides. Paul Johnson, in his book Modern Times estimates that over 100 million people died violently in just the first 50 years of the 20th century. With every death, Satan did his “Snoopy dance.” Satan loves violence; he loves to set fires and then watch us blame one another as we all burn.

3. Division – Satan loves to divide. Archbishop Sheen says that the word “diabolic” comes from two Greek words, dia and ballein, meaning “to tear apart.” Most literally, dia means “through” or “between” and ballein means “to throw or to cast.” Satan “casts things between us” in order to divide and distract us. Thus, we see our families, the Church, and our country divided. These divisions occur in almost every facet of our lives: race, sex, religion, politics, economics. We are divided on the basis of age, region, blue vs. red states, the coasts vs. the heartland, liturgy, music, language, and more trivialities.

Our families are broken. Divorce is rampant. Commitments of any sort are rejected as too difficult or even impossible. The Church is broken, divided into factions. Though we once we agreed on the essentials, now even appeals to shared truth are called intolerant.

Inwardly, we struggle with many divisive drives, with figurative and literal schizophrenia. We are drawn to what is good, true, and beautiful and yet at the same time to what is base, false, and evil. We know what is good, but desire what is evil; we seek love, but indulge in hate and revenge. We admire innocence but often revel in destroying it or at least in replacing it with cynicism.

Three characteristics of the diabolic: love of nudity, violence, and division. What do you think? Is the prince of this world working his agenda? Even more important, are we conniving with him? The first step in overcoming the enemy’s agenda is to recognize his tactics, name them, and then rebuke them in the name of Jesus.

Pay attention to what the good archbishop has to say!