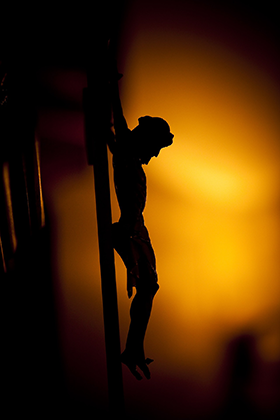 In today’s gospel, the Lord Jesus speaks of crosses and crowns. The apostles have only crowns in mind, but the Lord Jesus knows the price of that crown. And so He must teach them and us that crowns—the things that we value most—come only through the Cross.

It may help to remember the context of this gospel. Jesus is making His final journey to Jerusalem. He is on his way to the Cross, having already announced this to His disciples on two occasions. But throughout this final journey they prove unwilling and/or incapable of grasping what He is trying to teach them.

Today’s gospel is a perfect illustration of a common biblical theme known as the “inept response.” This refers to the common pattern in the gospels wherein Jesus presents a profound and important teaching, and within a matter of verses, or sometimes even just a few words, the apostles demonstrate that they have absolutely no understanding of what He just told them.

Today’s gospel illustrates the inept response. You may recall that on the previous two Sundays, the Lord gave two critically important teachings. Two weeks ago he stood a young child in their midst and spoke of the child as being truly great. He also warned that we must be able to receive the kingdom of God like a little child. Last week, He warned of the pernicious effects of wealth and spoke about how hard it is for the rich to enter the kingdom of Heaven.

And yet as this gospel opens, on very heels of those teachings, James, John, and later all the apostles wish honors upon themselves. They want seats at the head of the table, high offices in the Kingdom, which they still conceive of in very worldly terms. Never mind that Jesus has taught them that the place of honor is not at the head of the table or even at the foot of the table; the honor is upon those who wait on tables.

Let’s look at this gospel in three specific stages.

I. Misplaced Priorities – The Gospel opens with James and John approaching the Lord with an inept question, even a demand. “Grant that in your glory, we may sit, one at your right, and the other at your left.”

As we have already seen, this is a misplaced priority. Their understanding of the place of honor is worldly. Further, they want to move right to the head of the table. They want the Lord to grant them this honor. Even in a worldly way of thinking, places of honor must usually be earned. While some are born into royalty, most attain leadership and honors only after years of effort. Thus, even from a worldly point of view, James and John are being utterly bold, exhibiting little understanding that prior to honors comes labor, comes the earning of those honors. Their priorities are misplaced. They want the crown but without the Cross.

II. Major Price – The Lord Jesus replies to them, “You do not know what you are asking! Can you drink the cup that I drink, or be baptized with the baptism with which I am baptized?”

Was Jesus astonished, was He amused, or was He sad? It is not easy to say. But the bottom line is clear: they had absolutely no idea what they were asking. And neither do we. So often we want blessings, honors, or seats in high places. But we give little thought to the crosses that are necessary both to get there and to stay there.

Those who finally do attain leadership often know what a cross it is. It can be lonely; there are many pressures; often there are many long hours and the heavy weight of responsibility. True leadership has its perks, but it is hard. Most leaders know also the consistent sting of criticism and isolation.

And thus the Lord Jesus wonders if James and John have any idea what they are really talking about, what they are really asking for. His question is also poignant, for He has been trying to teach them of the passion, the pain, the crucifixion that awaits Him, and which even He, the Lord of glory, must endure before entering into His glory. No, not only do they not know what they are asking, they just don’t get it.

And this must make the Lord very sad. Sometimes we underestimate the kind of suffering the Lord endured long before the garden of Gethsemane that fateful night, when the sufferings of His passion began in earnest. Prior to that evening, the Lord endured a kind of death by a thousand cuts: enemies trying to trap Him, crowds wanting medical miracles but no true healing, strident and judgmental Pharisees and other religious leaders, ridicule, and disciples who walked away from Him as he taught about the Eucharist. And even the Twelve, to whom He looked for friendship, seemed completely disconnected from what He was trying to teach them. He also knew that one would betray Him, another deny Him, and all but one would abandon Him, never making it to the foot of the Cross. Oh, the grief that they gave the Lord!

And, oh, the grief that we continue to offer up! How we continue to offend His external glory and be difficult cases for Him! How easy it is for us to be hardheaded and stubborn, to have necks of iron and foreheads of brass! No, we shouldn’t be so quick to scorn the apostles because we do the very same things.

The Lord can only remind them and us of the monumental price, the true cost. No Cross, no crown! Ultimately, Heaven costs everything, for we must leave this world behind to reach Heaven. The Easter Sunday of glory, whether in this world or in the world to come, is accessed only by a journey through Good Friday.

It is a major price, but it is a price that James and John seem to dismiss. They simply state, categorically, that they are able to drink the cup that the Lord drinks and to be baptized into His death. But they have no idea what they’re talking about, and neither do most of us.

III. Medicinal Prescription – The other apostles join in the inept response by becoming indignant that James and John are trying to get special dibs on the seats of honor. Their indignity simply shows that they also have no idea of anything that the Lord is talking about.

Do they get it? Probably not, and neither do we. It takes most of us a lifetime before we finally get it through our thick skulls that the point in life is not to have the corner office with the view. We have everything upside down, exactly backwards. We are not rich in what matters to God. We think of bank accounts, prestigious addresses, the square footage of our homes, big salaries, and impressive titles—not service.

We may be on our death beds before we finally realize that the greatest people in our lives are those with the ministry of care, those who feed us, perhaps change our bandages and give us basic care.

Like the apostles, we can be so foolish. At the end of the day, and at our final judgment, God will not care about the square footage of our house, our titles, or our worldly honors. What will capture His notice is the times when we served, when we gave a cup of cold water to the thirsty or food to the hungry, when we instructed the ignorant, prayed for the dying, or cared for needs of the poor. He will look for the calluses and the wounds of our service. He will listen for our proclamation of His kingdom. And He will tell us that what we did for the least of our brothers, we did for Him.

Don’t miss the point of this gospel. There is no crown without the Cross. In the Kingdom, honors and crowns are reserved for those who serve, who take up the cross of washing the feet of others, of going to the lowest of places.

In today’s gospel, the Lord speaks of crosses and crowns, and in that specific order. We will not, we cannot, gain any crown in His kingdom without being baptized into His death, into His Cross, into the humble servitude of dying for others in loving service.

3 Replies to “No Cross, No Crown: A Homily for the 29th Sunday of the Year”