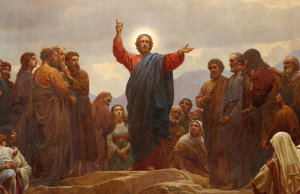 The gospel today focuses on a man named Jairus and a journey he makes from despair to deliverance, with the help of Jesus. Of course Jairus is not merely a synagogue official who lived two thousand years ago. You are Jairus and his journey is your journey.

We also meet in this gospel a woman of great faith, to whom the Lord points as an exemplar. If you are ready to accept it, she also can be you.

In his crisis, Jairus seeks Christ and, falling to his knees, he pleads for help and healing for his beloved daughter.

Note that it is this very crisis that brings him to Jesus so prayerfully. While suffering remains a mystery, it sometimes takes suffering and crisis to bring us to Jesus. It should not be this way, but it often is. Even for regular Church-goers, it sometimes takes a real crisis to make us finally cry out, “Lord, I really need you! I cannot survive without you!”

And thus Jairus, quite possibly a proud synagogue official possessed of great dignity, is now at the feet of Jesus pleading for mercy. And what of us? Does it take this? Perhaps it does. But for whatever purpose, God often allows suffering for a reason and for a season.

Jairus is now undergoing a trial, a test. But remember, there is a test in every testimony.

Note that there is a kind of tarrying here. Jesus could simply have healed the daughter instantly from where he was (as he did with the centurion’s servant). But instead Jesus says to Jairus, in effect, “Let us journey together for a while.” The Lord delays the healing of the daughter and, as we shall see, this delay means her death.

We, too, must often experience the Lord’s delay, for our crying out for healing and mercy does not often yield instant results. It is as if the Lord wants us to live with our questions and struggles for a while. It is as if He wants to walk with us in a journey of faith that requires waiting and watchful trust.

Such a delay is likely part of God’s plan to build our trust and faith, but whatever its cause, the Lord often requires that we wait, that we hold out. Gospel music is replete with such themes. One song says, “I promised the Lord that I would hold out. He said he’d meet me in Galilee.” Another song says, “Hold on just a little while longer, everything’s gonna be all right.” Another says, “Keep your hand on the plow; hold on!” Yet another says, “Lord, help me to hold out until my change comes.”

Thus, the Lord walks with Jairus and with us, summoning us to a faith that holds out. Scripture says, Weeping may endure for a night, but joy will come with the morning light (Ps 30:3).

III. TESTIMONY – Along the way, the Lord arranges a lesson in trust for Jairus in the person of a woman of strong faith. The text says,

There was a woman afflicted with hemorrhages for twelve years. She had suffered greatly at the hands of many doctors and had spent all that she had. Yet she was not helped but only grew worse. She had heard about Jesus and came up behind him in the crowd and touched his cloak. She said, “If I but touch his clothes, I shall be cured.” Immediately her flow of blood dried up. She felt in her body that she was healed of her affliction. Jesus, aware at once that power had gone out from him, turned around in the crowd and asked, “Who has touched my clothes?” But his disciples said to Jesus, “You see how the crowd is pressing upon you, and yet you ask, ‘Who touched me?'” And he looked around to see who had done it. The woman, realizing what had happened to her, approached in fear and trembling. She fell down before Jesus and told him the whole truth. He said to her, “Daughter, your faith has saved you. Go in peace and be cured of your affliction.”

And she touches Jesus.

Do not miss the significance of this touch; Jesus does not. Sensing the power of her faith, and that healing power has gone out from Him, He says, “Who touched me?” The disciples react with exasperation, in effect saying, “Lord, hundreds of people have been bumping up against you in the crowd!” But Jesus did not ask who had bumped up against Him or who had brushed aside Him. Rather, He asked, “Who touched me?” For it is one thing to bump up against the Lord and another thing to touch Him, to touch Him in faith.

Many people put more faith in Tylenol than they do in the Eucharist, because when they take Tylenol they actually expect something to happen; they expect that the pain will go away and healing will happen. But what do they expect when they receive Holy Communion? Often nothing.

How about you? Are you like the woman who touches Jesus expecting healing or like the crowd that just brushes past Him?

Jesus insists on meeting this woman of faith. And it may well be that He had Jairus in mind, as if to say, “Pay attention to this woman, Jairus. Do you see what her faith has gotten her? Do you believe, Jairus?” And into our own life, the Lord will also often send those who can testify to us of faith and show what faith can do.

Note that while there is, on Jairus’ journey, an encouraging testimony of what faith can do, there are also temptations against faith, and temptations to despair and hopelessness.

And what of us? We, too, often must confront a world and individuals that are largely negative.

And note how Jairus is told by the negative ones that he should dismiss Jesus: “Why bother the teacher any more?” Yes, there are many in our life and in this world who not only have no hope, but who insist that we dismiss Jesus, who tell us that He is of no relevance. Many secularists, themselves having no hope, ridicule us who do and taunt us to dismiss the Lord from our journey.

V. TRUST – The text says, Disregarding the message that was reported, Jesus said to the synagogue official, “Do not be afraid; just have faith.” When they arrived at the house of the synagogue official, he caught sight of a commotion, people weeping and wailing loudly. So he went in and said to them, “Why this commotion and weeping? The child is not dead but asleep.” And they ridiculed him. Then he put them all out.

To such as these, who are negative and who ridicule, Jesus has only a rebuke: he “put[s] them all out.”

One of the principal tasks of Jesus and His Holy Spirit is to grow faith within us. And as this faith grows, our victories become more and more evident and existent. Scripture says,

For thus says the Lord God, the holy One of Israel, “By waiting and calm you shall be saved, in quiet and in trust your strength lies … (Is 30:15)

Even youths shall faint and be weary, and young men shall fall exhausted; but they who wait for the LORD shall renew their strength, they shall mount up with wings like eagles, they shall run and not be weary, they shall walk and not faint (Is 40:30-31).

So do not throw away your confidence; it will be richly rewarded. You need to persevere so that when you have done the will of God, you will receive what he has promised. For in just a very little while, “He who is coming will come and will not delay. But my righteous one will live by faith. And if he shrinks back, I will not be pleased with him.” But we are not of those who shrink back and are destroyed, but of those who believe and are saved (Heb 10:35-39).

Hence the Lord Jesus commands faith to bring us reward. And that leads us to the final place in the journey.

Sure enough, Jairus’ journey with Jesus leads to victory. And so will ours. It may not be the Lord’s will to raise every recently deceased relative, but the Lord will surely give us the victory in every travail and difficulty. And to those who die in Him, He will surely say, as He said to the little girl, “I say to you, arise!”

And for us, in every trial, if you are in the Lord and journeying with Him, I promise you complete victory in Jesus. To every trial and distress, just say, “I’ll rise!”

Jairus has made a journey with Jesus, from trial to traveling with Jesus; through testimony and temptation to the empowering command: “Trust!”; and thereby unto triumph.

The journey of Jairus is our journey, and his victory is our victory if we, like him, journey with Jesus.

6 Replies to “From Despair to Deliverance: The Journey of Jairus – A Homily for the 13th Sunday of the Year”