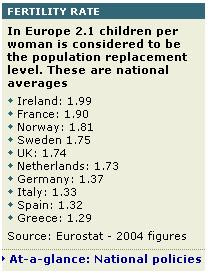 We have discussed here before the population implosion taking place in most parts of Europe. Approximately 2.1 Children per woman are needed to maintain the population of a given country or ethnic group. In most of Europe, the birthrate hovers well below 2, often as low as 1.3 in some Eastern European countries.  In effect these cultures are aborting and contracepting themselves out of existence.

As populations shrink, so do economies and so does the ability to provide basic services, and staff the engine of production. Some countries rely on large numbers of immigrants to fill the gaps. But these immigrants do not often share the faith and culture of the people they are gradually replacing. The result is a dying European culture. We have certainly discussed these matters extensively here before. (e.g. HERE)

Now comes the news from AP- that proposed legislation in Russia would seek to severely curtail abortion to stem the tide of eroding populations. Here is the brief article.

MOSCOW (AP) — Russia‘s Orthodox Church teamed with Conservative parliamentarians Monday to push legislation that would radically restrict abortions in a nation struggling to cope with one of the world’s lowest birthrates.

The legislation would ban free abortions at government-run clinics and prohibit the sale of the morning-after pill without a prescription, said Yelena Mizulina, who heads a parliamentary committee on families, women and children.

She added that abortion for a married woman would also require the permission of her spouse, while teenage girls would need their parents’ consent. If the legislation is passed, a week’s waiting period would also be introduced so women could consider their decision to terminate their pregnancy, Mizulina said.

Clearly, more will be necessary to stem the tide than this, but it is a recognition of the fact that abortion (and I would add, contraception) have devastated Western Cultures (including Eastern Europe). Any culture that either celebrates them or is too permissive of them will ultimately suffer from a kind of implosion.

For, it would seem that many today consider children too much trouble, too expensive, or too impacting our their lifestyle. Many prefer expensive and large homes, along with many expensive creature comforts. They prefer these to children.  When this becomes a cultural trend, that culture is doomed.

Some will argue that the cost of living is too high today to have more than one or two children. While economic questions have a considerable complexity, it must also be admitted that we have chosen rather elaborate and expensive lifestyles. There are many things that we could and would do without, if we valued children more.

Now, faced with serious threats to their on-going viability as a country and a culture, the Russians are considering how to limit abortion, which has been legal there since the 1920s!

Let’s pray that other countries will wake up, including our own to the fact that we cannot go on killing our children, or  preventing their existence and expect to thrive. France has begun to turn things around, it’s birth rate is edging back up toward 2.0. Perhaps other countries will also turn back the tide on abortion and contraception, and come to see that if we do not love life, we tend to die.

Chart above from Economist.com

Here is a video report of the same story.